I have a relative by marriage who’s a retired public-school teacher. She loved to moan about her “low” pay. She wasn’t alone, of course. Her refrain has been heard throughout the land for decade. Truth be told, however, she and her ilk were and are overpaid, as several commentators have explained (e.g., here, here, and here). The following diagram illustrates the machinations that yield above-market compensation for public-school teachers (and other) “public servants”. 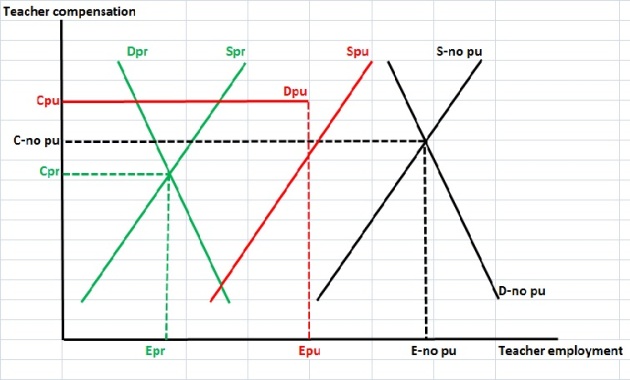 1. The diagonal, solid-black lines represent the demand for teachers in the absence of tax-funded (public) schools (D-no pu) and the supply of teachers in the absence of tax-funded schools (S-no pu). The intersection of the S and D curves yields the level of teacher compensation (C-no pu) and employment (E-no pu) that would result were there nothing but private schools. (I am, for now, putting aside the question whether government should require school attendance through a certain age or grade, or dictate what is taught in schools.)

2. The picture changes dramatically with the introduction of tax-funded schools (indicated by the red lines). The supply of teachers for public schools (Spu) is to the left of S-no pu because (a) not all teachers are willing to work in public schools and (b) not all teachers are “qualified” to teach in public schools. The second condition arises when potential teachers have learned too much about the subjects they would teach, at the expense of taking too few (or none) of the “education” courses that enable fairly dim education majors to compile inflated grade-point averages.

3. The horizontal, solid red line indicates the inflated compensation (Cpu) that is offered by tax-funded school systems. This above-market rate of compensation is the product of an inter-scholastic “arms race”, in which school systems — goaded by administrators, teachers, parents, and (often) local businesspersons — seek to outdo the lavishness of other school systems, not only in the compensation of teachers and administrators but also in the number and kinds of non-essential courses and activities, and the lavishness and modernity of facilities and equipment. All of which is paid for (in the main) by taxpayers and consumers who have no say in the matter, but whose income and property can be seized for failure to pay the requisite taxes.

5. Not surprisingly, there are more teachers who are willing to work at public-school rates of compensation than public schools can hire (Epu), even with their inflated budgets. That is why some teachers turn to private schools, others accept substitute-teaching jobs, and some end up doing things like selling used cars. The green lines represent the supply of (Spr) and demand for (Dpr) private-school teachers. and the corresponding compensation of (Cpr) and number of teachers employed by (Epr) private schools.

Because the subsidization of public schools, there are far more teachers than would be the case in an entirely private system. Advocates of tax-funded education would count that as a plus, as they would the above-market wages of public-school teachers. In fact, it is a minus, because it means that resources are being diverted to less productive uses than they would be were education an entirely private matter. Moreover, mediocre teachers and administrators — often outfitted with lavish facilities and equipment — are being paid more than necessary to “educate” children in useless subjects, at the expense of taxpayers who could put that money to work providing better homes, relevant training, and more jobs for those same children.

This analysis undoubtedly applies to higher education as well as K-12 education. The presence of tax-funded colleges and universities unnecessarily drives up the cost of higher education and burdens many persons who derive no benefit from it.

In summary, public “education” — at all levels — is not just a rip-off of taxpayers, it is also an employment scheme for incompetents (especially at the K-12 level) and a paternalistic redirection of resources to second- and third-best uses. And, to top it off, public education has led to the creation of an army of left-wing zealots who, for many decades, have inculcated America’s children and young adults in the advantages of collective, non-market, anti-libertarian institutions, where paternalistic “empathy” supplants personal responsibility.

Related posts:
School Vouchers and Teachers’ Unions
Whining about Teachers’ Pay: Another Lesson about the Evils of Public Education
I Used to Be Too Smart to Understand This
International Law vs. Homeschooling
GIGO
Religion in Public Schools: The Wrong and Right of It
The Home Schooler Threat?
The Real Burden of Government
The Higher Education Bubble
Our Miss Brooks
“Intellectuals and Society”: A Review