The following table summarizes the frequency with which the justices disagreed with one another in non-unanimous cases during the recently completed 2019-2020 term (October Term 2019). (For a complete treatment of the terms during which John Roberts has been chief justice — OT2005-OT2019 — go here and scroll down past the three-part table that traces the Court’s lines of succession.) The use of non-unanimous cases highlights the degree of disagreement among justices, which would be blurred if all cases were included in the analysis.

I used the statistics that underlie the preceding table, and its counterparts for the preceding 14 terms, to construct the following index of defection (D) for each justice, by term:

The “conservative” wing’s members during the 2005-2019 terms were and are Alito, Gorsuch, Kavanaugh, Kennedy, Roberts, Thomas, and Scalia. The “liberal” wings members in the period were and are Breyer, Ginsburg, Kagan, Sotomayor, Souter, and Stevens.

Kennedy’s long-standing proneness to defect more often than his colleagues grew markedly in the 2014-2015 terms and receded a bit in the 2016 term. His turnaround in the 2017 term restored him to the Court’s “conservative” wing. Whereupon he retired and was succeeded by Kavanaugh.

Roberts’s slippage in the 2011-2015 terms has never been fully reversed, and his performance in the 2019 term bodes ill for the future of the “conservative” wing. Roberts’s transparent attempts to protect the Court from accusations of political bias (e.g., the Obamacare, census, and DACA cases), have rightly caused conservatives to be wary of him.

Gorsuch started out strongly in his abbreviated 2016 term (he joined the Court in April 2017), but he seems to be a fairly solid “conservative”, with some notable exceptions (e.g., LGBTQ rights).

Kavanaugh’s record in his second term aligns him with Gorsuch as somewhat of a “conservative” maverick — but not in the same league as Kennedy and Roberts.

What’s most striking about the preceding graphs, other than Kennedy’s marked departure from the “conservative” wing after the 2010 term and sudden return to it in his final term, is the increasing coherence (ideological, not logical) of the “liberal” wing. This graph captures the difference between the wings: 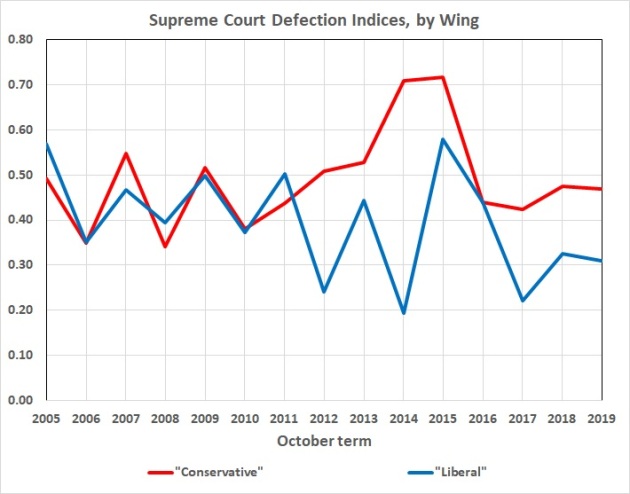 Despite Kennedy’s retirement, the presence of Roberts (and to a lesser extent, Gorsuch and Kavanaugh), ensures that the “conservative” wing will be less monolithic than the “liberal” wing.

The statistics also yield an index of polarization (P) for each justice, by term:

A slight upward trend over the past 15 terms? Perhaps. But there has been definite movement toward polarization since Kennedy’s peak defection terms (2014-2015). Trend or no trend, it’s clear that there is and has been a great deal of polarization among most of the justices. The exceptions are among the “conservatives”, namely Gorsuch, Kavanaugh, and Roberts — which is why the “liberal” wing is more monolithic.

I would be pleased no end if the Supreme Court consisted of Clarence Thomas and eight clones of him. It seems to me that Justice Thomas has been the most faithful adherent of the Constitution among all of the justices who have served on the Court since I became interested in its doings more than 50 years ago. Taking Thomas as the standard for constitutional judging, it is possible to grade some of the other justices who have served with him, including all of his present colleagues.

Reversing the numbers discussed thus far, so that degree of disagreement becomes degree of agreement, and focusing on the extent to which other justices agree with Thomas non-unanimous cases, I obtain the following statistics: 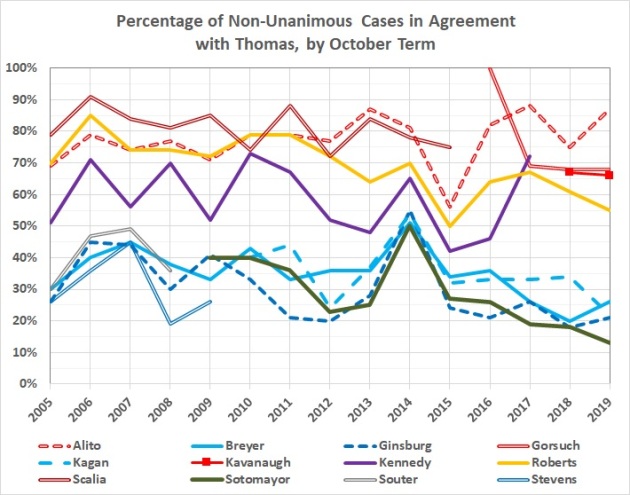 Scalia was a stalwart “conservative”, albeit somewhat quirky inn criminal cases, as is Gorsuch. Alito remains a stalwart, and Kavanaugh shows promise. Roberts continues to slip away. Breyer, Ginsburg, Kagan, and Sotomayor remain stalwart “liberals”. At the present rate, Sotomayor will find herself alone on the Court’s far-left fringe.