For reasons I outlined in “The Price of Government,” the post-Civil War boom of 1866-1907 finally gave way to the onslaught of Progressivism. Real GDP grew at the rate of 4.3 percent annually during the post-Civil War boom; it has since grown at an annual rate of 3.3 percent. The difference between the two rates of growth, compounded over a century, is the difference between $13 trillion (2009’s GDP in 2005 dollars) and $41 trillion (2009’s potential GDP in 2005 dollars).

As I said in “The Price of Government,” this disparity

may seem incredible, but scan the lists here and you will find even greater cross-national disparities in per capita GDP. Go here and you will find that real, per capita GDP in 1790 was only 4.6 percent of the value it had attained 218 years later. Our present level of output seems incredible to citizens of impoverished nations, and it would seem no less incredible to an American of 1790. In sum, vast disparities can and do exist, across nations and time.

The main reason for the disparity is the intervention of the federal government in the economic affairs of Americans and their businesses. I put it this way in “The Price of Government”:

What we are seeing [in the present recession and government’s response to it] is the continuation of a death-spiral that began in the early 1900s. Do-gooders, worry-warts, control freaks, and economic ignoramuses see something “bad” and — in their misguided efforts to control natural economic forces (which include business cycles) — make things worse. The most striking event in the death-spiral is the much-cited Great Depression, which was caused by government action, specifically the loose-tight policies of the Federal Reserve, Herbert Hoover’s efforts to engineer the economy, and — of course — FDR’s benighted New Deal. (For details, see this, and this.)

But, of course, the worse things get, the greater the urge to rely on government. Now, we have “stimulus,” which is nothing more than an excuse to greatly expand government’s intervention in the economy. Where will it lead us? To a larger, more intrusive government that absorbs an ever larger share of resources that could be put to productive use, and counteracts the causes of economic growth.

One of the ostensible reasons for governmental intervention is to foster economic stability. That was an important rationale for the creation of the Federal Reserve System; it was an implicit rationale for Social Security, which moves income to those who are more likely to spend it; and it remains a key rationale for so-called counter-cyclical spending (i.e., “fiscal policy”) and the onerous regulation of financial institutions.

Has the quest for stability succeeded? If you disregard the Great Depression, and several deep recessions (including the present one), it has. But the price has been high. The green line in the following graph traces real GDP as it would have been had economic growth after 1907 followed the same path as it did in 1866-1907, with all of the ups and down in that era of relatively unregulated “instability.” The red line, which diverges from the green one after 1907, traces real GDP as it has been since government took over the task of ensuring stable prosperity. 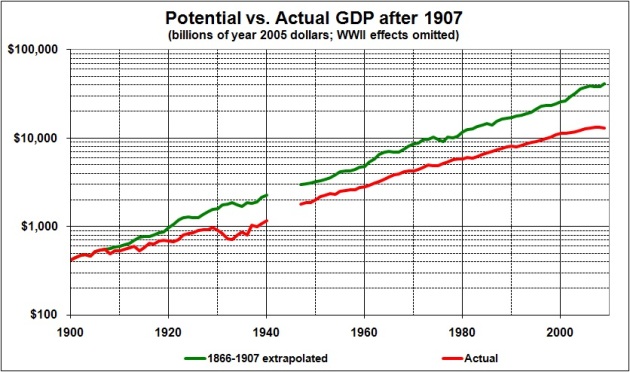 Only by overlooking the elephant in the room — the Great Depression — can one assert that government has made the economy more stable. Only because we cannot see the exorbitant price of government can we believe that it has had something to do with our “prosperity.”

What about those fairly sharp downturns along the green line? If it really is important for government to shield us from economic shocks, there are much better ways of getting the job done that they ways now employed. There was no federal income tax during the post-Civil War boom (one of the reasons for the boom). Suppose that in the early 1900s the federal government had been allowed to impose a small, constitutionally limited income tax of, say, 0.5 percent on gross personal incomes over a certain level, measured in constant dollars (with an explicit ban on exemptions, deductions, and other adjustments, to keep it simple and keep interest groups from enriching themselves at the expense of others). Suppose, further, that the proceeds from the tax had a constitutionally limited use: the payment of unemployment benefits for a constitutionally limited time whenever real GDP declined from quarter to quarter.

Perhaps that’s too much clutter for devotees of constitutional simplicity. But wouldn’t the results have been worth the clutter? The primary result would have been growth at a rate close to that of 1866-1907, but with some of the wrinkles ironed out. The secondary result — and an equally important one — would have been the diminution (if not the elimination) of the “need” for governmental intervention in our affairs. 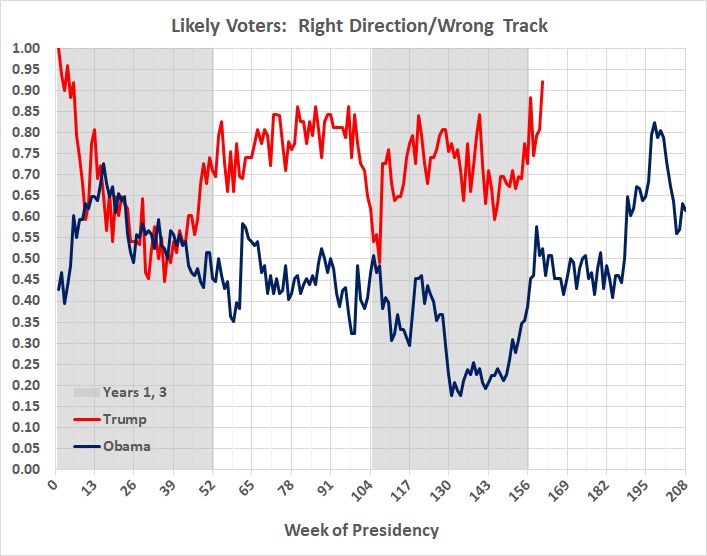