The bottom line of this post is an an assessment of the prospects for Trump’s re-election, which have declined markedly since coronavirus began to do real damage to the economy.

To reach that assessment, I review Trump’s poll numbers and the economic outlook as reflected in the stock market. I derive the poll numbers from a reliable source: Rasmussen Reports:

Trump’s approval ratings have dropped steadily in the past 8 weeks: 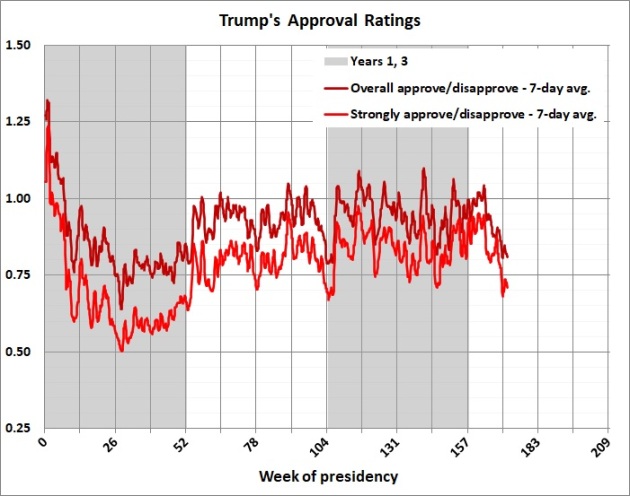 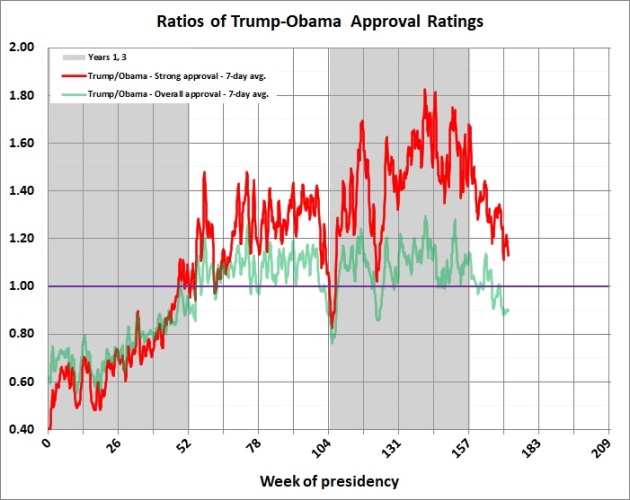 Derived from Rasmussen Reports approval ratings for Obama and Trump.

Trump’s slippage is also obvious in a straightforward comparison of strong-approval ratings, averaged over 7 days. It is now almost as low as Obama’s was at this stage 8 years ago, when Obama’s was holding steady before a sharp pre-election rise:

Every week since the first inauguration of Obama, Rasmussen Reports has asked 2,500 likely voters whether they see the country as going in the right direction or being on the wrong track. Figure 5 shows the ratios of right direction/wrong track for Trump and Obama. Here, again, the mood of the voters has turned starkly gloomy, a bad sign for Trump: 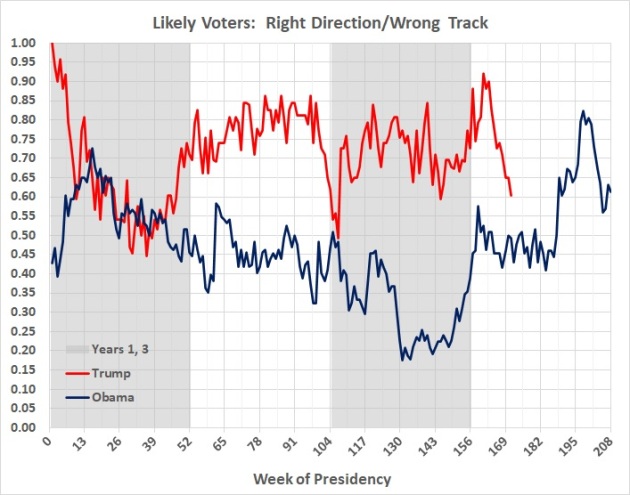 Meanwhile, despite the largest quarter-to-quarter decline in real GDP (-4.8 percent) since the crash of 2008, the stock market has begun a tentative recovery from a steep decline:

Trump’s popularity, relative to Obama’s 8 years ago, is in decline. (See figure 2.)

Voters currently have a much gloomier view of the state of the nation than they did when Obama was re-elected. (See figure 5.)

The tentative stock-market recovery (Figure 6) may signal an economic recovery, which could lead to a recovery in Trump’s popularity.

The possibility that U.S. Attorney John Durham’s criminal investigation of the origins of Spygate will yield revelations damaging to Democrats.

The following graph depicts Trump’s approval ratings, according to Rasmussen Reports, since the onset of the failed effort to remove Trump from office by impeachment and trial:

Rasmussen’s polling method covers all respondents (a sample of likely voters) over a span of three days. The gaps represent weekends, when Rasmussen doesn’t publish the results of the presidential approval poll.

The Washington Post broke the story on September 20 about Trump’s July 25 phone conversation with the president of Ukraine. Thus the results for September 16 through September 20 didn’t reflect the effects of the story on the views of Rasmussen’s respondents. Trump’s approval ratings continued to rise after September 20, and peaked on September 24, the day on which the House officially initiated an impeachment inquiry. Trump’s approval ratings bottomed on October 25 but since then — despite much sound and fury, culminating in articles of impeachment and acquittal by the Senate —  they have returned to where they were on September 16, given the range of error advertised by Rasmussen (±2.5 percentage points with a 95-percent level of confidence.).

If the impeachment effort had any effect, it was to strengthen allegiance to Trump among the kind of voter who put him in office in the first place — the person who sees the Democrat party as the enemy of real people. It is far too soon to say that Trump’s re-election is assured. But it isn’t too soon to say that the impeachment effort made it more likely.