The title of this post is a play on John Maynard Keynes’s famous line, “in the long run we are all dead,” which was not a defense of government spending during the Great Depression. The line comes from  Keynes’s Tract on Monetary Reform, which he published in 1923, years before the Depression. Keynes was in fact writing about the need for government action against inflation.

This post, as its title may suggest, complements an earlier post, “Are We Mortgaging Our Children’s Future?” As I say there, Obama’s economic plan (if it can be called that)

…Obama[‘s] initiatives…will stimulate a massive growth in the size and intrusiveness of government.

Here, I begin with links to three papers about the multiplier effect of government spending:

“Is Government Spending Too Easy an Answer?” (N. Gregory Mankiw)

The bottom line: Increases in government spending probably have a much smaller multiplier (stimulative) effect than claimed by the administration; the effect may well be negative. That is, increases in government spending probably will crowd out private consumption and investment, both in the near term (when spending increases are supposed to spur private consumption and investment) and in the long run (as the increases become permanent).

Next, I offer a baker’s dozen links to commentary about Obama’s economic policies and their implications:

“The Left’s Grip on the American Economy” (Forbes.com)

“The Obama Revolution: Paid for by the people” (Opinion Journal)

“The 2% Illusion: Take everything they earn and it still won’t be enough” (Opinion Journal)

“Federal Outlays as a Percentage of GDP” (N. Gregory Mankiw)

“The Great Non Sequitur: The sleight of Hand behind Obama’s Agenda” (Charles Krauthammer)

“Neither Moderate Nor Centrist” (Peter Robinson)

“Even Worse than the Great Depression” (Donald Luskin)

Taylor sums it up, thusly:

…I now worry that [Obama] may be deepening what looks more and more like a depression and may engineer so much spending, debt, and government control of the economy as to leave most Americans permanently less prosperous and less free.

There is a bit of hope, in the unlikely form of public opinion. Obama’s approval index (percentage of respondents strongly approving minus percentage strongly disapproving) has gone from a high of +30 on January 22 to a low of +6 (as of March 9). If economic logic doesn’t sway Obama, perhaps he can be swayed by public opinion — though I very much doubt it, given his long-standing adherence to economic and political extremism. (For example, his voting record as a senator placed him among the most “liberal,” i.e., statist, members of the U.S. Senate.)

Where are we headed then? The stock market — for all of its exaggerated swings — does a pretty good job of reflecting expectations about the country’s future economic performance. Witness the performance of the S&P 500: 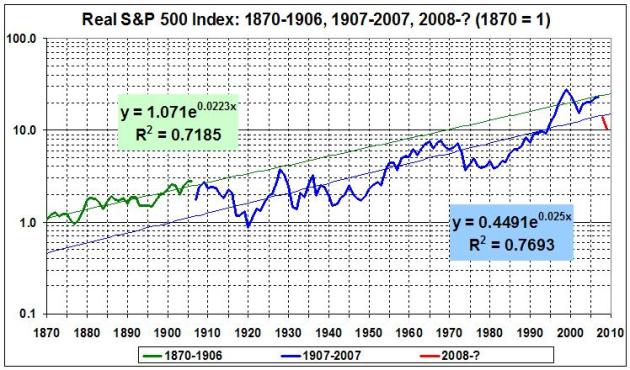 The now-enviably stable post-Civil War trend was broken in the early 1900s, when the “progressive” agenda began to take hold — most notably with the passage of the Food and Drug Act and the vindictive application of the Sherman Antitrust Act by Theodore Roosevelt. It has been all downhill since, with the ratification of the Sixteenth Amendment (enabling the federal government to tax incomes); the passage of the Clayton Antitrust Act (a more draconian version of the Sherman Act, which also set the stage for unionism); World War I (a high-taxing, big-spending, command-economy operation that whet the appetite of future New Dealers); a respite (the boom of the 1920s, which was owed to the Harding-Coolidge laissez-faire policy toward the economy); and the Great Depression and World War II (truly tragic events that imbued in the nation a false belief in the efficacy of the big-spending, high-taxing, regulating, welfare state that we now “enjoy”).

Yes, stock prices have continued to rise, on the whole, but they have fluctuated wildly around a trend that is about 50 percent below the trend that prevailed from 1870 to the early 1900s. Such is the destructive power of the regulatory-welfare state.

The reaction of the stock market to Obama’s ascendancy since May 2008 — when he locked up the Democrat nomination — suggests that we have entered an era of even-lower stock prices. I have indicated the onset of this new era by plotting the values for 2008 and 2009 (to date) in red. Lower stock prices would be bad enough, in and of themselves, but what they betoken is the looming economic catastrophe that surely will result if Obama and his ilk persist in their oppressive program of spending, taxing, and regulating.

Eugene Fama and Kenneth French (distinguished financial economists at the University of Chicago) get it almost right:

Future returns may be positive, over the long run, but those returns — and economic output — will be lower than they would have been, absent Obamanomics.