Barack Obama — having pushed for and signed into law the thing known as Health Reform — which contains a phony promise to reduce the government’s budget deficit* — met yesterday with his self-created Bipartisan Fiscal Commission. The commission is to recommend ways of reducing future federal deficits. In the course of the meeting, Obama

spoke about the work he has done already towards trying to restore a stable fiscal path, from asking Congress to restore the “pay as you go” rule, to going line by line through the budget for more than $20 billion in savings, to challenging long-entrenched but outdated defense projects, to proposing a freeze in most of the discretionary budget for the next three years.

Wow! $20 billion in savings, as against a deficit of hundreds of billions of dollars — a deficit that would be exacerbated by the spending plans of our “parsimonious” president: 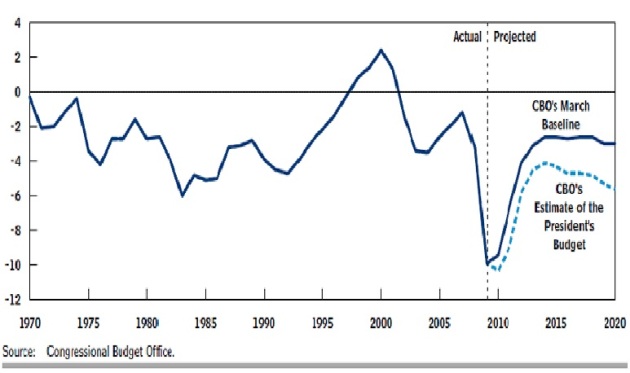 There are only two ways to reduce future deficits significantly: raise taxes or cut Social Security, Medicare, and Medicaid. The total bill for those programs (excluding the hidden costs of Obamacare) will rise from 10 percent of GDP to 23 percent of GDP when our grandchildren are in their “golden years”:

If the commissioners have any courage, they will recommend the gradual phase-out of Social Security, Medicare, and Medicaid — along the lines of my proposed solution:

2. Pay normal benefits (those implicitly promised under the present system) to persons who are then collecting Social Security and to all other qualifying persons who have then reached the age of 62.

3. Persons who are 55 to 61 years old would receive normal benefits, pro-rated according to their contributions as of Abolition Day.

5. Persons who are younger than 45 would receive a lump-sum repayment of their contributions (plus accrued interest) at full retirement age, in lieu of future benefits. That payment would automatically go to a surviving spouse or next-of-kin if the recipient dies intestate. Otherwise, the recipient could bequeath, transfer, or sell his interest in the payment at any time before it comes due.

6. The residual obligations outlined in points 2-5 would be funded by a payroll tax, which would diminish as those obligations are paid off.

Repeat, with appropriate variations, for Medicare and Medicaid [and Obamacare].

The alternative is to burden the productive sectors of the economy, thus further reducing the rate of economic growth and making Social Security, Medicare, Medicaid, and Obamacare even less affordable. Is that the future we want for our descendants?
__________
* The head of the Congressional Budget Office acknowledges that Obamacare

maintains and puts into effect a number of policies that might be difficult to sustain over a long period of time. For example, the legislation:

– Reduces the growth rate of Medicare spending (per beneficiary, adjusting for overall inflation) from about 4 percent per year for the past two decades to about 2 percent per year for the next two decades. It is unclear whether such a reduction can be achieved, and, if so, whether it would be through greater efficiencies in the delivery of health care or through reductions in access to care or the quality of care. . . .

– Establishes a tax on insurance plans with relatively high premiums in 2018 and (beginning in 2020) indexes the tax thresholds to general inflation.