It has long been conventional wisdom in baseball that batters hit their peak in their late 20s and go into decline after the age of 30. But inasmuch as this conventional wisdom pre-dates the days of massive computerized databases and spreadsheets, can it be true, or is it the baseball equivalent of an old wives tale?

To answer that question, I went to the Play Index feature of Baseball-Reference.com. I was able to find (thanks to a paid subscription to Play Index) the career OPS+ statistic* for all inactive or retired players from 1901 through 2009 who had at least 3,000 plate appearances. As of yesterday, there were 1,416 such players. I selected 57 of them by the simple (and essentially random) method of picking #1 Babe Ruth (career OPS+ 207) and every 25th batter thereafter: #26 Jeff Bagwell (149), #51 Babe Herman (140, and so on, down to #1401 Bill Kellefer (63). The resulting sample represents great-to-poor batters, players in all eras from 1901 onward, and careers long, short (but not too short), and in between.

I indexed each player’s single-season OPS+ statistics to that player’s career-high OPS+. For example, Babe Ruth’s career looks like this:

After making the same computation for the other 56 batters, I plotted the indexed values for all batters against age, with the following result: 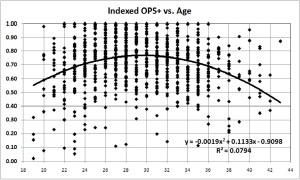 The ages at which the players peaked (index value of 1.00) range from 22 to 36, but the polynomial curve tells the tale: major-league batters tend to improve gradually as they approach ages 29-30, and then to decline gradually thereafter.

That is a broad generalization, based on a random sample of batters. Even within that sample, and certainly across the entire population of batters, there are many-many exceptions. Babe Ruth is a prominent exception. He peaked at age 25, by the measure of OPS+, declined somewhat, improved somewhat, and did not go into his final decline until the age of 37.

In any event, the conventional wisdom stands up to scrutiny, but (like conventional wisdom about many things) it is a rule of thumb, not an iron-clad law of behavior.
__________
* Definition: “OPS+ is OPS [on-base plus slugging percentage] adjusted for the park and the league in which the player played,” where the league average for a given year is 100. Thus “An OPS+ of 150 or more is excellent and 125 very good, while an OPS+ of 75 or below is poor.”