My complete re-thinking of the Constitution is here. This post focuses on the much-abused First Amendment, specifically, “freedom of speech, and of  the press.” Contrary to the current state of constitutional jurisprudence, these “freedoms” do not comprise an absolute license to “express” almost anything, regardless of the effects on the social fabric and national defense.

One example of misguided absolutism is found in Snyder v. Phelps, a case recently and wrongly decided by the U.S. Supreme Court. This is from “The Burkean Justice” (The Weekly Standard, July 18, 2011):

When the Supreme Court convened for oral argument in Snyder v. Phelps, judicial formalities only thinly veiled the intense bitterness smoldering among the parties and their supporters. At one table sat counsel for Albert Snyder, father of the late Marine Lance Corporal Matthew Snyder, who was killed in al Anbar Province, Iraq. At the other sat Margie Phelps, counsel for (and daughter of) Fred Phelps, whose notorious Westboro Baptist Church descended upon Snyder’s Maryland funeral, waving signs bearing such startlingly offensive slogans as “Thank God for IEDs,” “God Hates Fags,” and “Thank God for Dead Soldiers.” A federal jury had awarded Snyder nearly $11 million for the “severe depression” and “exacerbated preexisting health conditions” that Phelps’s protest had caused him.

In the Supreme Court, Phelps argued that the jury’s verdict could not stand because the First Amendment protected Westboro’s right to stage their protest outside the funeral. As the Court heard the case on a gray October morning, Westboro protesters marched outside the courthouse, informing onlookers that God still “Hates Fags” and advising them to “Pray for More Dead Soldiers.”

Amidst that chaos, the Court found not division, but broad agreement. On March 2, 2011, it held that Westboro’s slurs were protected by the First Amendment, and that Snyder would receive no compensation, let alone punitive damages, for the emotional injuries that he had suffered. Chief Justice John Roberts wrote the Court’s opinion, speaking for all of his brethren, conservatives and liberals alike—except one.

Justice Samuel Alito rejected the Court’s analysis and wrote a stirring lone dissent. “The Court now holds that the First Amendment protected respondents’ right to brutalize Mr. Snyder. I cannot agree.” Repeatedly characterizing Westboro’s protest as not merely speech but “verbal assaults” that “brutally attacked” the fallen Snyder and left the father with “wounds that are truly severe and incapable of healing themselves,” Justice Alito concluded that the First Amendment’s text and precedents did not bar Snyder’s lawsuit. “In order to have a society in which public issues can be openly and vigorously debated, it is not necessary to allow the brutalization of innocent victims. .  .  . I therefore respectfully dissent.”

Snyder v. Phelps would not be the last time that Alito stood nearly alone in a contentious free speech case this term. Just weeks ago, as the Court issued its final decisions of the term, Alito rejected the Court’s broad argument that California could not ban the distribution of violent video games without parental consent. Although he shared the Court’s bottom-line conclusion that the particular statute at issue was unconstitutional, he criticized the majority’s analysis in Brown v. Entertainment Merchants Association as failing to give states and local communities latitude to promote parental control over children’s video-game habits. The states, he urged, should not be foreclosed from passing better-crafted statutes achieving that legitimate end.

Moreover, Alito’s opinions in those cases followed a solo dissent late in the previous term, in United States v. Stevens, where eight of the nine justices struck down a federal law barring the distribution of disturbing “crush videos” in which, for example, a woman stabs a kitten through the eye with her high heel, all for the gratification of anonymous home audiences….

The source of Alito’s positions:

[T]hose speculating as to the roots of Alito’s jurisprudence need look no further than his own words—in public documents, at his confirmation hearing, and elsewhere. Justice Alito is uniquely attuned to the space that the Constitution preserves for local communities to defend the vulnerable and to protect traditional values. In these three new opinions, more than any others, he has emerged as the Court’s Burkean justice….

A review of Alito’s Snyder, Brown, and Stevens opinions quickly suggests the common theme: Alito, more than any of his colleagues, would not allow broad characterizations of the freedom of speech effectively to immunize unlawful actions. He sharply criticized the Court for making generalized pronouncements on the First Amendment’s reach, when the Court’s reiterations of theory glossed over the difficult factual questions that had given rise to regulation in the first place—whether in grouping brutal verbal attacks with protected political speech; or in equating interactive Duke Nukem games with the text of Grimm’s Fairy Tales; or in extending constitutional protection to the video of women illegally crushing animals. And Alito was particularly sensitive to the Court’s refusal to grant at least a modicum of deference to the local communities and state officials who were attempting to protect their populations against actions that they found so injurious as to require state intervention….

The ability of the press to undermine national defense with impunity was established in World War II and was ratified the Iraq War. Here is  one example, from 2005, courtesy of Winds of Change:

Today’s New York Times provides intimate detail on the charter flights used by the CIA to ferry prisoners across the globe. The names of the charter companies are disclosed. The types of aircraft flown are revealed. The points of departure and destinations of these flights are stated. There is even a picture of one of the charter craft, with the identification number of the aircraft in full display. All of this is extremely valuable to al Qaeda members who may have an interest in rescuing, or if deemed appropriate, conducting a suicide attack against suspected extraction flights. A successful attack resulting from this story can endanger the lives of CIA, security and civilian personnel involved in these missions, as well as deprive the intelligence and military communities of valuable information that can be gained from interrogations….

What exactly is the purpose of the New York Times in reporting on sensitive issues such as these? Do they even care about the consequences of making such information pubic? It appears the editors of the New York Times feel that breaking a titillating story about sensitive CIA operations is much more important than national security and the lives of those fighting in the war. All to our detriment.

Ann Coulter reminds us of other examples:

If the Times‘s reporting is not “aid and comfort” to the enemy, what is? As I wrote here:

The preservation of life and liberty necessarily requires a willingness to compromise on what — in the comfortable world of abstraction — seem to be inviolable principles. For example:

The NYT article about a CIA operation being conducted in support of an authorized war amounts to the same thing. The right to publish cannot be absolute and should not exempt anyone from a charge of treason.

A general and compelling case against the current reign of absolutism is made by David Lowenthal in No Liberty for License: The Forgotten Logic of the First Amendment. My copy is now in someone else’s hands, so I must rely on Edward J. Erler’s review of the book: 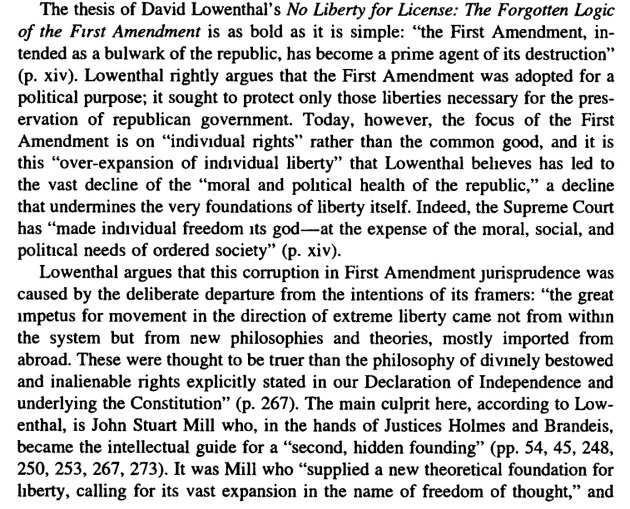 Liberty is lost when the law allows “freedom of speech, and of the press” to undermine the civil and state institutions that enable liberty.

One thought on “Rethinking the Constitution: “Freedom of Speech, and of the Press””