I do not want my liberty (or yours) to depend on the preferences of voters in places like California, Massachusetts, New York, and Vermont. Nor should my liberty (or yours) be hostage to the outcome of a presidential election, to the vagaries of Supreme Court rulings, or to a filibuster-proof cabal of leftists in the U.S. Senate.

It is not supposed to be that way. (See the The Federalist Papers and the Constitution of the United States.) The last time that the presidency of the United States was in the hands of someone who gave a damn about liberty (Ronald Reagan), he did not have enough support in Congress to do more than chisel at the edges of federal power. Now, the GOP-controlled House of Representatives can only try to block Barack Obama’s statist initiatives — and he will go around the House, by issuing unconstitutional executive orders.

In “Secession, Anyone?” I suggested the formation of the Free States of America. The FSA could be built upon Red-Red States. A Red-Red State meets three criteria: (1) its electoral votes have gone to the Republican presidential candidate in the last four elections; (2) its governorship and its legislature will remain in the hands of Republicans for at least two more years (Nebraska’s “nonpartisan” legislature is here counted as Republican); and both of its U.S. Senate seats are held by Republicans (and will be for at least the next two years).  There are 13 Red-Red States: 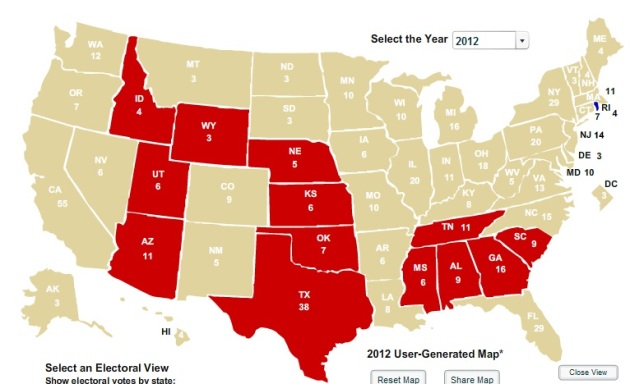 (If the southeast quadrant of that map resembles an earlier union of disaffected States, so be it. Secession and slavery are separate and separable issues.)

With the fertile ground afforded by those 13 States, it should be possible to create a new republic — one that is bound by a restored Constitution.

When? Sooner rather than later. Sooner because with Democrats in control of the White House and the Senate, the egregious governmental acts of the past four years will not be reversed. Therefore, all who remain subjects of the United States will suffer the consequences of those egregious acts: economic stagnation and rationed health care being two of the more salient consequences.

How? By insisting on the constitutional right of every State to withdraw from the union known as the United States.

Getting out would not be a simple thing, by any means, and there would be a price to pay (e.g., less-free trade between the USA and the FSA; a more costly defense, per capita). But it seems to me that the left ought to be ecstatic about the prospect of controlling a nation — even a somewhat diminished one — while meeting less resistance. Not only would the Red-Red States be gone, but surely a lot of conservatives in Blue States would emigrate to the FSA. What could be more enticing to a leftist than the opportunity to issue edicts at will?

What I am suggesting, of course, is a negotiated secession — a treaty of division, if you will. Do not rule it out. The alternative is worse.