WITH PARTICULAR ATTENTION TO TIGER STADIUM

As opening day nears, my mind turns to ballparks — the green cathedrals. I was lucky enough to have attended several games in Tiger Stadium, where a seat in the upper deck between first base and third base afforded the best view of the game, anywhere, any time. Why? Because the upper deck rose directly above the lower deck, with little setback, so that a fan in the upper deck (in front of the posts) had a bird’s eye view of the action.

Tiger Stadium had another great distinction: it was a hitter’s park. Despite its deep center field, it had accessible power alleys and the upper deck in right field overhung the playing field by about 10 feet — an open invitation to a high fly ball. The park had a “cozy” feeling because it was double-decked (i.e., fully enclosed) all the way around, and the background (green fences, green seats) must have been conducive to hitting.

I wondered how Tiger Stadium stacked up against other hitter-friendly parks of the past and present. I turned to the Play Index at Baseball-Reference.com, where I could generate season-by-season batting statistics for each major-league park from 1914 to the present. I focused on three statistics: batting average (BA), slugging percentage (SLG), and home runs per plate appearance (HR/PA).

I compiled BA, SLG, and HR/PA for each major-league ballpark in every season from 1914 through 2014. Just to avoid wild swings from season to season and over time, I normalized the annual figures, using 2014 as the index year. This graph depicts the normalization factors: 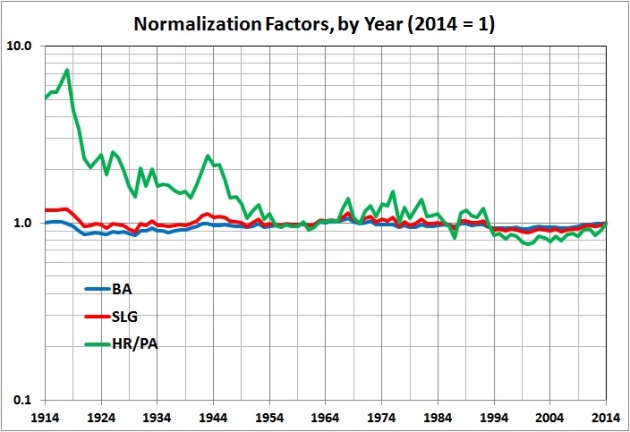 These factors doesn’t mean, for example, that a home run in 1918 (the peak year of the green line) is “worth” or “equivalent to” 7.4 home runs in 2014. As I’ve written here, cross-temporal comparisons of baseball statistics (especially over spans of decades) are meaningless given the substantial changes in conditions of play (equipment, lighting, field conditions) and the size and strength of the players.

Having normalized the annual statistics for each ballpark, I then searched for the “outliers” — the parks in which BA, SLG, and HR/PA were markedly above or below average for sustained periods. As it turned out, some of the outliers on the high end were also outliers on the low end. (I’ll say more about that, below.)

Here are the graphs of the outliers of interest for each statistic: 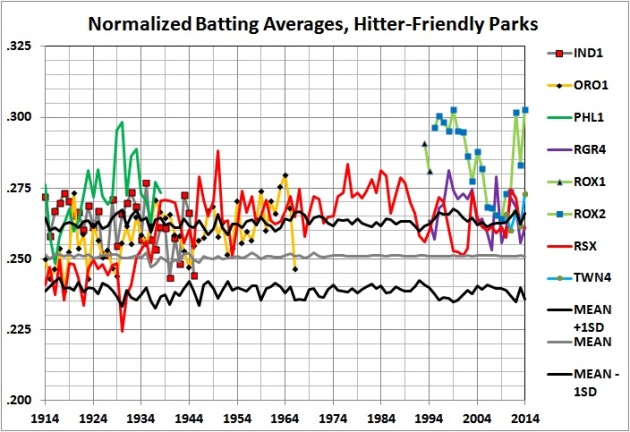 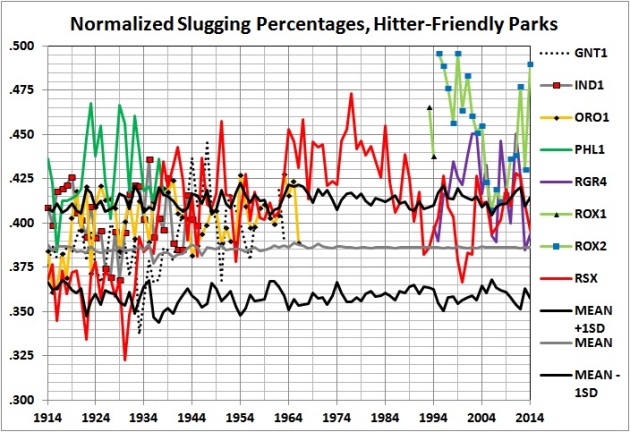 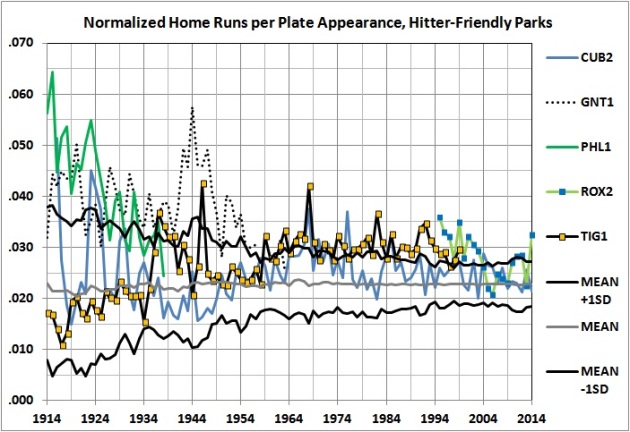 The names of the ballparks listed in the legends can be found in this table of all ballparks in use from 1914 through 2014:

If you want to know why some ballparks (e.g., Fenway Park and Tiger Stadium) went from pitcher-friendly to hitter-friendly, look at the changes in their configurations. The details are given at this site, and this one provides diagrams of parks at key stages in their evolution.

There are no surprises (for me) in the graphs. And they show that Tiger Stadium was every bit the hitters’ paradise it was thought to be by millions of fans and thousands of players.

Tiger Stadium holds a special place in my heart not only because it was the home of the favorite team of my youth and early adulthood, but also because my father and I saw the Tigers win both games of a doubleheader there on August 15, 1961. Ironically, they were close, low-scoring games (2-0 and 3-2), though Norm Cash‘s homer was decisive in the first game. Even more exciting, however, was a single by Tiger great Al Kaline that produced a come-from-behind-bottom-of-the-ninth win in the second game. (The box scores and game summaries are here and here.)

The air in Tiger Stadium on that balmy summer evening was blue with the haze of cigar and cigarette smoke; the stadium was packed and rocking (without the aid of a mascot, canned music, or stroboscopic effects); the manicured playing field glowed brightly in the lights; and I was there with my father, seated in the upper deck behind third base and watching every pitch, every swing, and every play unfold in cinematic splendor. A priceless memory. 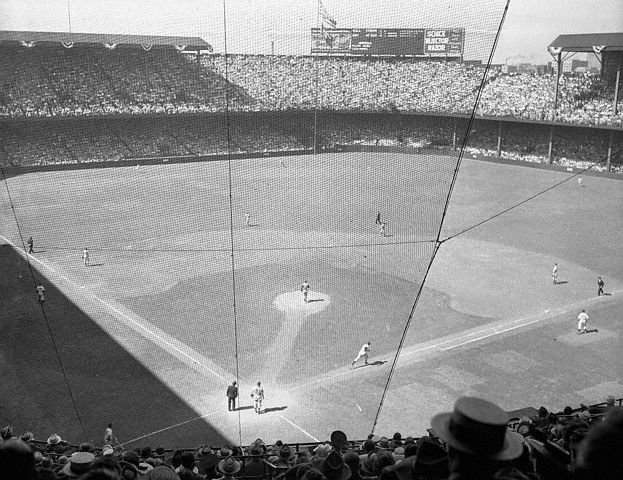 This photo of Tiger Stadium (then Briggs Stadium), was taken at the All-Star Game on July 8, 1941. It shows the birds-eye view from the upper deck. The foul-ball screen detracted from the view behind home plate, which is why I preferred seats behind third base, where spectators were shielded from the glare of the late-afternoon sun. But for the absence of light towers (added in 1948), the stadium looks as it did in 1961.