Here are five (my answers are below):

1. Why are killers (too often) not killed for their crimes?

2. Why can some parties suppress and distort the speech of others, yet continue to enjoy the liberties (including freedom of speech) that enable their actions?

3. How is it that some very-rich persons claim to pay “too little” in taxes, yet they (a) do not voluntarily contribute to the U.S. Treasury and (b) want to impose higher taxes on persons who are not very rich?

4. If “climate change” is a problem that causes the governments of some cities and States to impose extraordinary regulations (e.g., extra gasoline taxes, tighter emissions standards), why do those same governments countenance any activity that (supposedly) contributes to “climate change” (e.g., municipal transit, official travel, subsidized arenas, the construction of houses larger than, say, 2,000 square feet)? (And do the officials who push such regulations bother to compute the vanishingly small effect of those regulations on “climate change”, assuming that there is any effect?)

5. Why do so many people choose to live in metropolitan areas — only to complain about crime, traffic congestion, high prices, and stress — when they could be relieved of those woes by moving out? The opportunities are rife: 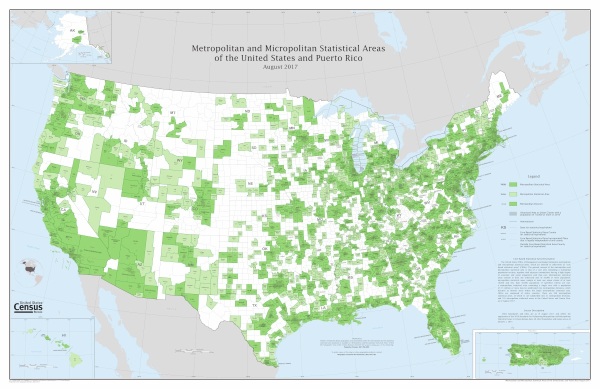 1. The opposition to capital punishment is an exemplar of politically correct (i.e., muddled) thinking. It is epitomized in this common combination of attitudes: aborting an innocent fetus is all right; killing a killer is bad. Why? Because killing is “bad”, regardless of the end it serves.  It is like the PC idea that saying “gun”, drawing one, or owning one is bad because guns are “bad”, no matter what (unless your hired bodyguard carries a gun).

2. Leniency with respect to entities that suppress speech is of a piece with pacifism. It invites the aggressor to do unto you what you should do unto him before he can do it unto you.

3. Some very-rich persons are empty-headed twits who care more about virtue-signalling than they care about the welfare of their fellow citizens (those who pay taxes, at any rate), and they are hypocrites, to boot.

4. Change the preceding answer by substituting “municipal and State officials” for “very-rich persons”.

5. The are many reasons for staying in a metropolitan area, some of them good ones; for example, moving to an extra-metropolitan area would mean the loss of ready access to “culture” (arts, entertainment, dining, organized sports), the abandonment of established social relationships, and very possibly (because of a dearth of suitable jobs) a drastic reduction in one’s standard of living despite lower housing costs. There are, however, some reasons that are merely self-defeating, namely, inertia and pride (e.g., reluctance to give up the Lexus SUV and McMansion). Putting up with crime, traffic congestion, high prices, and stress — while complaining about such things — points to the uselessness of most surveys. Talk is cheap.