The Boston Red Sox, last year’s AL East and World Series champions, probably won’t make it to the AL wild-card playoff game. The Milwaukee Brewers, last year’s NL Central champs, are in the same boat. The doormat of AL Central, the Detroit Tigers, are handily winning the race to the bottom, with this year’s worst record in the major leagues. 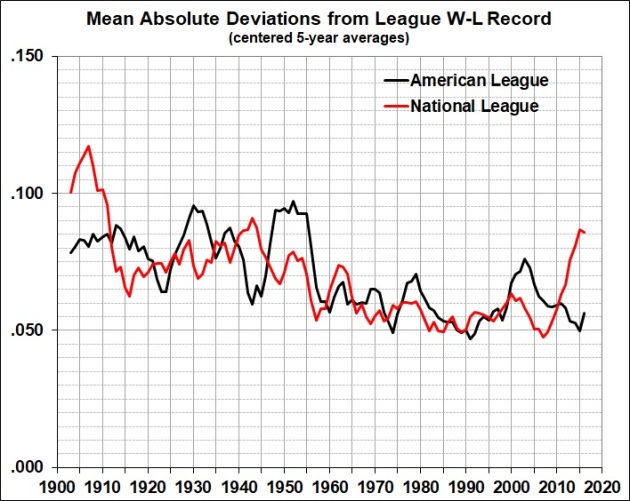 Based on statistics for the National League and American League compiled at Baseball-Reference.com.

Though the NL began play in 1876, I have analyzed its record from 1901 through 2018, for parallelism with the AL, which began play in 1901. The rough similarity of the two time series lends weight to the analysis that I will offer shortly.

First, what do the numbers mean? The deviation between a team’s won-lost (W-L) record and the average for the league is simply

Dt = Rt – Rl , where, Rt is the team’s record and Rl is the league’s record in a given season.

Both leagues generally became more competitive from the early 1900s until around 1970. Since then, the AL has experienced two less-competitive periods: the late 1970s (when the New York Yankees re-emerged as a dominant team), and the early 2000s (when the Yankees were enjoying another era of dominance that began in the late 1990s). (The Yankees’ earlier periods of dominance show up as local peaks in the black line centered at 1930 and the early 1950s.)

What explains the long-term movement toward greater competitiveness in both leagues? Here’s my hypothesis:

Integration, which began in the late 1940s, eventually expanded the pool of baseball talent by opening the door not only to American blacks but also to black and white Hispanics from Latin America. (There were a few non-black Hispanic players in major-league ball before integration, but they were notable freckles on the game’s pale complexion.) Integration of blacks and Latins continue for decades after the last major-league team was nominally integrated in the late 1950s.

While there are now 88 percent more major-league teams than there were in 1949, there are far fewer teams in major-league and minor-league ball, combined. Meanwhile the population of the United States has more than doubled, and that source of talent has been augmented significantly by the recruitment of players of Latin America.

Further, free agency, which began in the mid-1970s, allowed weaker teams to attract high-quality players by offering them more money than stronger teams found it wise to offer, given roster limitations. Each team may carry only 25 players on its active roster until the final month of the season. Therefore, no matter how much money a team’s owner has, the limit on the size of his team’s roster constrains his ability to sign the best players available for every position. So the richer pool of talent is spread more evenly across teams.