If it is, it will arrive on two fronts: political and economic.

On the political front, Conrad Black and Victor Davis Hanson are (sort of) optimistic that the left’s audacious power-grab will fail. A recent op-ed by Black at Epoch Times ends with this:

In those circumstances, the Supreme Court, its attempt at appeasement of the Democrats by abdicating as head of a co-equal third branch of government having failed, might also reassert the legitimacy of the Constitution.

A turning in the road is almost at hand.

We are becoming cynical 1980s Eastern Europeans who quietly scoffed at their daily government news. And this is step one to a repudiation of the lies we have been living with—that masks were necessary outdoors even for those fully vaccinated; that derelict, sexual harasser Andrew Cuomo is a noted author, Emmy-winner and national icon rather than a reckless sexual-harasser and responsible for needless death and misery by his unhinged long-term facilities policies; that Oprah, LeBron, and the Obamas are genuine voices of what it is like to be oppressed in America, and all the subsidiary untruths: the “brave” former intelligence officials who signed campaign-sensitive affidavits seconding Joe Biden’s insistence that Hunter’s laptop was a Russian disinformation trick; that Trump scoffed at “proof” that Russians put bounties on Americans in Afghanistan as they were appease;, and that Joe Biden has no cognitive issues and never did, at least of the sort that prompted his predecessor to take cognitive tests and draw the attention of a Yale psychiatry professor to diagnose him as unhinged in absentia.

In sum, the woke movement daily, hourly, second-by-second hinges on untruth, from the 1619 canard to America is systemically racist. And the number who spot the lies is beginning to outnumber the number who lives by them—which means the Revolution is likely to follow the Jacobin rather than Bolshevik fate.

On the economic front, the huge increase in government spending over the past two years — which Biden wants to perpetuate — will bear rotten fruit.

Here is the increase, in perspective: 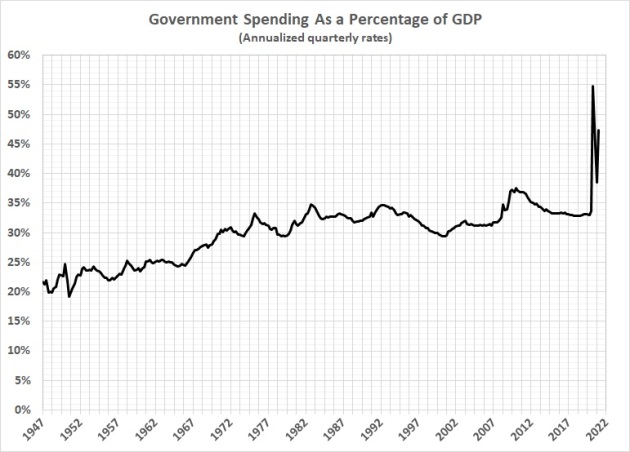 As I have amply documented, government spending doesn’t “multiply”. If fact, it “divides”; that is, it causes real GDP to decline because government spending (and the regulatory activities funded by it) result in the transfer of resources from productive private uses to unproductive and counterproductive government uses, while also discouraging business expansion and productive investments in capital formation.

The bottom line is that a sustained increase in the share of GDP spent by government from about 33 percent (the average for the 10 years before the recent surge) to about 45 percent (the average for the recent surge) would cause a long-term reduction 4 percent of real GDP. If that doesn’t seem like a lot, consider that it would be the equivalent of a Great Recession that lasts for years on end instead of two or three years.

Voters flocked to the Democrat Party in the 1930s because they believed (mistakenly) that it — and especially FDR’s “New Deal” — would rescue them from the Great Depression. Voters will flock the the GOP in the 2020s if the Democrat Party remains stubbornly “woke” and persists in economic policies that impoverish them.

And if voters fail to switch in droves, it will prove the wisdom of the Framers’ (long-abandoned) Constitution, which was designed to prevent demagogues from pillaging the nation.

Victor Davis Hanson, “Are Americans Becoming Sovietized?“, The Daily Signal, May 6, 2021
Patricia McCarthy, “Aldous Huxley Foresaw Our Despots — Fauci, Gates, and Their Vaccine Crusaders“, American Thinker, May 5, 2021
Jeffrey A. Tucker, “Is the U.S. Economy a Virtual Reality?“, AIER, May 2, 2021