What inflation? The spike on the right in this graph: 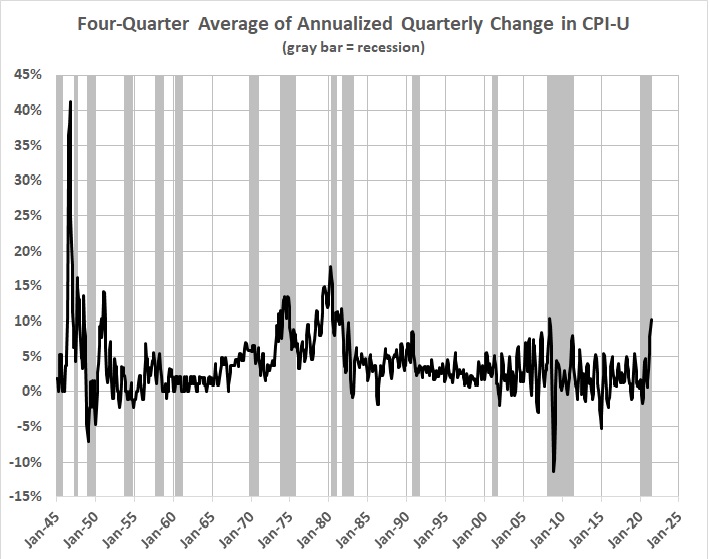 There are many reasons why inflation (except in moderation) is a bad thing. You can find those reasons by consulting Wikipedia or doing a web search. But there’s one reason that isn’t getting much press right now: Inflation hinders economic growth. Again, I won’t spell out the reasons, but you will find them if you research the ill effects of inflation.

You should be worried about the effect of inflation on economic growth because the effect is negative. Therefore, persistently high inflation means slower economic growth, which means less employment, less lucrative employment, less real output of products and services and — of course — a standard of living that’s lower than it would otherwise be. The top 10 percent won’t have anything to worry about because (a) they probably won’t be affected and (b) even if they are, the effects will be trivial (for them). The other 90 percent will suffer, and the suffering will hit the middle class (hard), the working class (harder), and the truly poor (hardest of all).

How do I know that inflation has an adverse effect on economic growth. Well, it’s among several things that, taken together, have an adverse effect on economic growth: an increase in the fraction of GDP that is commanded by government spending; a decrease in the rate of private, nonresidential investment spending; an increase in regulatory activity (as measured by Federal Register pages), and an increase in the rate of inflation as measured by the CPI-U. (See this for details.) As a result, there has been a steady down-trend in the rate of GDP growth since the end of World War II. (See Figure 2 here; it is slightly out of date but the trend has continued its decline in the two years that have passed.)

The r-squared may not seem impressive, but it is statistically significant at  the 0.01 level (for those of you who care about such things).

What does the equation mean? It means that an annual rate of inflation above 2 percent generally drives the rate of GDP growth into negative territory. It means, specifically, that a 1 percentage point increase in the rate of inflation will cause the rate of growth to decline by 0.23 percentage point in a year — almost double the effect that I had derived earlier. Yes, there’s a lot of uncertainty about the accuracy of the estimate, but the negative relationship between inflation and GDP growth isn’t in doubt.

A little bit of inflation is a necessary thing in a growing economy because increases in outlays on investments must precede the resulting increases in quantity and quality of economic goods. But a sudden and persistent increase in the price of goods, fueled by government money-printing, is a bad thing. It creates uncertainty, and uncertainty is an enemy of sound economic decision-making.

What we are now experiencing may prove to be a very bad thing.