Updated, with links to a related article and additional posts, and republished.

Friedrich Hayek, in his Nobel Prize lecture of 1974, “The Pretence of Knowledge,” observes that

the great and rapid advance of the physical sciences took place in fields where it proved that explanation and prediction could be based on laws which accounted for the observed phenomena as functions of comparatively few variables.

Hayek’s particular target was the scientism then (and still) rampant in economics. In particular, there was (and is) a quasi-religious belief in the power of central planning (e.g., regulation, “stimulus” spending, control of the money supply) to attain outcomes superior to those that free markets would yield.

But, as Hayek says in closing,

There is danger in the exuberant feeling of ever growing power which the advance of the physical sciences has engendered and which tempts man to try, “dizzy with success” … to subject not only our natural but also our human environment to the control of a human will. The recognition of the insuperable limits to his knowledge ought indeed to teach the student of society a lesson of humility which should guard him against becoming an accomplice in men’s fatal striving to control society – a striving which makes him not only a tyrant over his fellows, but which may well make him the destroyer of a civilization which no brain has designed but which has grown from the free efforts of millions of individuals.

I was reminded of Hayek’s observations by John Cochrane’s post, “Groundhog Day” (The Grumpy Economist, May 11, 2014), wherein Cochrane presents this graph: 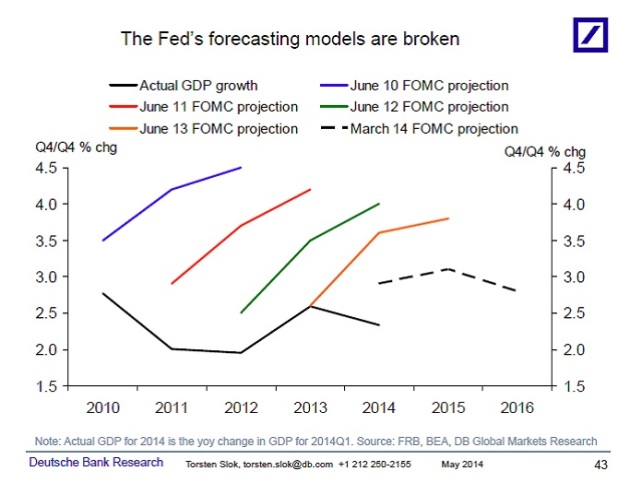 Every serious forecast looked like this — Fed, yes, but also CBO, private forecasters, and the term structure of forward rates. Everyone has expected bounce-back growth and rise in interest rates to start next year, for the last 6 years. And every year it has not happened. Welcome to the slump. Every year, Sonny and Cher wake us up, and it’s still cold, and it’s still grey. But we keep expecting spring tomorrow.

Whether the corrosive effects of government microeconomic and regulatory policy, or a failure of those (unprintable adjectives) Republicans to just vote enough wasted-spending Keynesian stimulus, or a failure of the Fed to buy another $3 trillion of bonds, the question of the day really should be why we have this slump — which, let us be honest, no serious forecaster expected.

(I add the “serious forecaster” qualification on purpose. I don’t want to hear randomly mined quotes from bloviating prognosticators who got lucky once, and don’t offer a methodology or a track record for their forecasts.)

The Fed’s forecasting models are nothing more than sophisticated charlatanism — a term that Hayek applied to pseudo-scientific endeavors like macroeconomic modeling. Nor is charlatanism confined to economics and the other social “sciences.” It’s rampant in climate “science,” as Roy Spencer has shown. Consider, for example, this graph from Spencers’s post, “95% of Climate Models Agree: The Observations Must Be Wrong” (Roy Spencer, Ph.D., February 7, 2014): 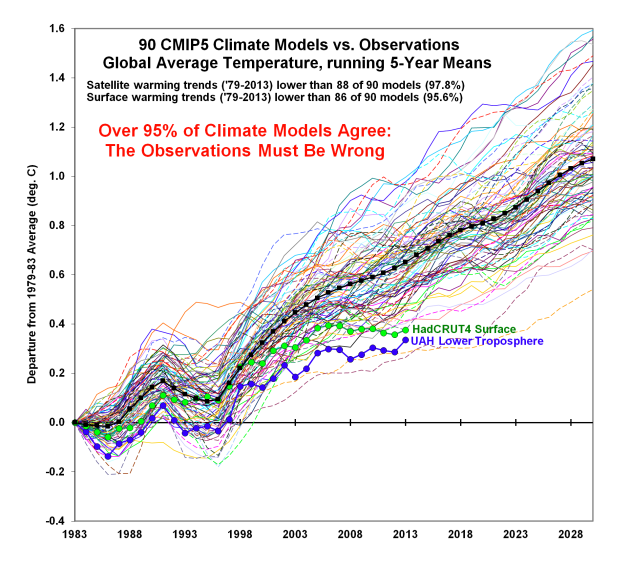 Spencer has a lot more to say about the pseudo-scientific aspects of climate “science.” This example is from “Top Ten Good Skeptical Arguments” (May 1, 2014):

1) No Recent Warming. If global warming science is so “settled”, why did global warming stop over 15 years ago (in most temperature datasets), contrary to all “consensus” predictions?

2) Natural or Manmade? If we don’t know how much of the warming in the longer term (say last 50 years) is natural, then how can we know how much is manmade?

3) IPCC Politics and Beliefs. Why does it take a political body (the IPCC) to tell us what scientists “believe”? And when did scientists’ “beliefs” translate into proof? And when was scientific truth determined by a vote…especially when those allowed to vote are from the Global Warming Believers Party?

4) Climate Models Can’t Even Hindcast How did climate modelers, who already knew the answer, still fail to explain the lack of a significant temperature rise over the last 30+ years? In other words, how to you botch a hindcast?

5) …But We Should Believe Model Forecasts? Why should we believe model predictions of the future, when they can’t even explain the past?

6) Modelers Lie About Their “Physics”. Why do modelers insist their models are based upon established physics, but then hide the fact that the strong warming their models produce is actually based upon very uncertain “fudge factor” tuning?

7) Is Warming Even Bad? Who decided that a small amount of warming is necessarily a bad thing?

8) Is CO2 Bad? How did carbon dioxide, necessary for life on Earth and only 4 parts in 10,000 of our atmosphere, get rebranded as some sort of dangerous gas?

9) Do We Look that Stupid? How do scientists expect to be taken seriously when their “theory” is supported by both floods AND droughts? Too much snow AND too little snow?

10) Selective Pseudo-Explanations. How can scientists claim that the Medieval Warm Period (which lasted hundreds of years), was just a regional fluke…yet claim the single-summer (2003) heat wave in Europe had global significance?

11) (Spinal Tap bonus) Just How Warm is it, Really? Why is it that every subsequent modification/adjustment to the global thermometer data leads to even more warming? What are the chances of that? Either a warmer-still present, or cooling down the past, both of which produce a greater warming trend over time. And none of the adjustments take out a gradual urban heat island (UHI) warming around thermometer sites, which likely exists at virtually all of them — because no one yet knows a good way to do that.

It is no coincidence that leftists believe in the efficacy of central planning and cling tenaciously to a belief in catastrophic anthropogenic global warming. The latter justifies the former, of course. And both beliefs exemplify the left’s penchant for magical thinking, about which I’ve written several times (e.g., here, here, here, here, and here).

Magical thinking is the pretense of knowledge in the nth degree. It conjures “knowledge” from ignorance and hope. And no one better exemplifies magical thinking than our hopey-changey president.

Related reading: Walter E. Williams, “The Experts Have Been Wrong About a Lot of Things, Here’s a Sample“, The Daily Signal, July 25, 2018

Related posts:
Modeling Is Not Science
The Left and Its Delusions
Economics: A Survey
AGW: The Death Knell
The Keynesian Multiplier: Phony Math
Modern Liberalism as Wishful Thinking
“The Science Is Settled”
Is Science Self-Correcting?
“Feelings, Nothing More than Feelings”
“Science” vs. Science: The Case of Evolution, Race, and Intelligence
Modeling Revisited
Bayesian Irrationality
The Fragility of Knowledge
Global-Warming Hype
Pattern-Seeking
Babe Ruth and the Hot-Hand Hypothesis
Hurricane Hysteria
Deduction, Induction, and Knowledge
Much Ado about the Unknown and Unknowable
A (Long) Footnote about Science
The Balderdash Chronicles
The Probability That Something Will Happen
Analytical and Scientific Arrogance