According to Wikipedia, the so-called hot-hand fallacy is that “a person who has experienced success with a seemingly random event has a greater chance of further success in additional attempts.” The article continues:

[R]esearchers for many years did not find evidence for a “hot hand” in practice. However, later research has questioned whether the belief is indeed a fallacy. More recent studies using modern statistical analysis have shown that there is evidence for the “hot hand” in some sporting activities.

I won’t repeat the evidence cited in the Wikipedia article, nor will I link to the many studies about the hot-hand effect. You can follow the link and read it all for yourself.

What I will do here is offer an analysis that supports the hot-hand hypothesis, taking Babe Ruth as a case in point. Ruth was a regular position player (non-pitcher) from 1919 through 1934. In that span of 16 seasons he compiled 688 home runs (HR) in 7,649 at-bats (AB) for an overall record of 0.0900 HR/AB. Here are the HR/AB tallies for each of the 16 seasons:

Here’s what that season looks like, in graphical form:

The word for it is “streaky”, which isn’t surprising. That’s the way of most sports. Streaks include not only cold spells but also hot spells. Look at the relatively brief stretches in which Ruth was shut out in the HR department. And look at the relatively long stretches in which he readily exceeded his HR/AB for the season. (For more about the hot and and streakiness, see Brett Green and Jeffrey Zwiebel, “The Hot-Hand Fallacy: Cognitive Mistakes or Equilibrium Adjustments? Evidence from Major League Baseball“, Stanford Graduate School of Business, Working Paper No. 3101, November 2013.)

The same pattern can be inferred from this composite picture of Ruth’s 1919-1934 seasons: 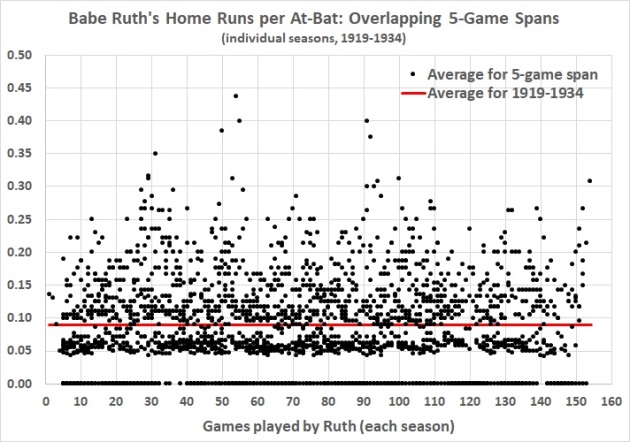 Here’s another way to look at it:

If hitting home runs were a random thing — which they would be if the hot hand were a fallacy — the distribution would be tightly clustered around the mean of 0.0900 HR/AB. Nor would there be a gap between 0 HR/AB and the 0.03 to 0.06 bin. In fact, the gap is wider than that; it goes from 0 to 0.042 HR/AB. When Ruth broke out of a home-run slump, he broke out with a vengeance, because he had the ability to do so.

In other words, Ruth’s hot streaks weren’t luck. They were the sum of his ability and focus (or “flow“); he was “putting it all together”. The flow was broken at times — by a bit of bad luck, a bout of indigestion, a lack of sleep, a hangover, an opponent who “had his number”, etc. But a great athlete like Ruth bounces back and put it all together again and again, until his skills fade to the point that he can’t overcome his infirmities by waiting for his opponents to make mistakes.

The hot hand is the default condition for a great player like a Ruth or a Cobb. The cold hand is the exception until the great player’s skills finally wither. And there’s no sharp dividing line between the likes of Cobb and Ruth and lesser mortals. Anyone who has the ability to play a sport at a professional level (and many an amateur, too) will play with a hot hand from time to time.

The hot hand isn’t a fallacy or a matter of pure luck (or randomness). It’s an artifact of skill.