The pseudo-libertarian camp is on the warpath about the war on drugs and a resulting rate of incarceration that seem “too high,” relative to the rates in other Western nations. That other Western nations have different distributions of ethnicity and age than the U.S. is beside the point when one’s objective is to pummel the American legal system for prosecuting victimless crimes … blah, blah, blah. Drug-use is as victimless as suicide, except that a fair proportion of drug users and dealers do, in fact, victimize innocent bystanders. Drugs, like alcohol, lower a person’s inhibitions — often with destructive results — and the cost of drugs is often financed by theft and related violence.

Well, then, says the apologist for drug use, just legalize drugs and they will become affordable and the criminal element will be eliminated from the drug trade. The legalization of drugs will make them affordable only by those persons who can afford to pay the inevitably inflated prices that will result from government licensing of vendors, restrictions on the number and location of vendors, and restrictions on the amount of drugs an individual may purchase in a given period. (Regulation and paternalism go hand in hand.)

Of course, non-drug-using taxpayers could be required to subsidize drug users. But I doubt that such a proposition would get very much legislative support. As for the criminal element, government restrictions would open the door to a black market, operated by the usual suspects. In the meantime, drug-users would continue to expose themselves to the same inhibition-loosing effects, and many of them would still resort to crime to underwrite their drug intake.

of the two causal explanations [of a drop in the crime rate] that have found the most support, one—the economy—had nothing to do with crime policy. The other, the petering out of the crack epidemic, was simply a return to normal after weathering the effects of a bad policy. Once distributors of the new drug had established turf, levels of violence returned to normal.

The only problem with Balko’s analysis is its incorrectness, which is driven (no doubt) by his pseudo-libertarian desire to castigate the government for prosecuting “victimless” crime.

In truth, according to my quantitative analysis — done almost four years ago — there are three measurable and significant determinants of violent and property crime: the percentage of black in the population, the rate of real growth in GDP, and the incarceration rate. (The fact that the analysis was done before the Great Recession counts in its favor, inasmuch that event would distort the relationship between crime and economic growth.) What follows are some key portions of the post that documents my earlier analysis.

Here’s a graphical depiction of the crime rates and all of the variables I considered:

A few comments about each of the explanatory variables: BLK, unfortunately, stands for a segment of the population that has more than its share of criminals — and victims. Having more men in the armed forces (ENL) should reduce, to some extent, the number of crime-prone men in the civilian population…. I use the annual rate of real, per-capita economic growth (GRO) to capture the rate of employment — or unemployment — and the return on employment, namely, income. (The use of year-over-year growth vice cumulative growthavoids collinearity with the other variables.) PRS encompasses not only the effects of taking criminals off the streets, but the means by which that is done: (a) government spending on criminal justice and (b) juries’ and courts’ willingness to put criminals behind bars and keep them there for a good while. SNT ensures that convicted criminals are put away for a good while.

I focused on violent-plus-property crime (VPC) as the dependent variable, for two reasons. First, there is a lot more property crime than violent crime (VIC); that is, VPC is a truer measure of the degree to which crime affects Americans. Second, exploratory regression runs on VPC yielded more robust results than those on VIC.

Even at that, it is not easy to tease meaningful regressions from the data, given high correlations among several of the variables (e.g., mandatory sentencing guidelines and prison population, number of blacks and prison population, male enlistees and number of blacks). The set of six explanatory variables — taken one, two, three, four, five, and six at a time — can be used to construct 63 different equations. I estimated all 63, and rejected all of those that returned coefficients with counterintuitive signs (e.g., negative on BLK, positive on GRO).

+346837BLK (number of blacks as a decimal fraction of the population)

-3040.46GRO (previous year’s change in real GDP per capita, as a decimal fraction of the base)

The minimum, maximum, and mean values of the dependent and explanatory variables:

Even though the coefficient on GRO isn’t strongly significant, it isn’t negligible, and the sign is right — as are the signs on BLK and PRS. The sign on the intercept is counterintuitive — the baseline rate of crime could not be negative. The negative sign indicates the omission of key variables. But forcing variables into a regression causes some of them to have counterintuitive signs when they are highly correlated with other, included variables.

In any event, the equation specified above does a good job of explaining variations in the crime rate: 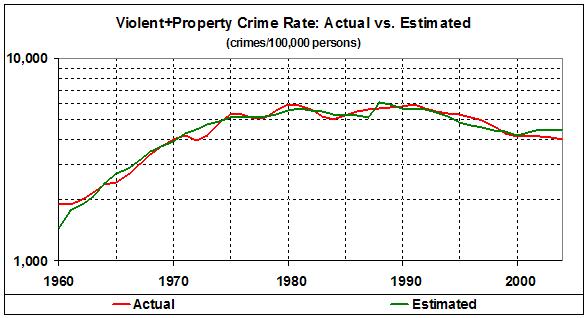 I especially like the fact that the equation accounts for two policy-related variables: GRO and PRS:

1. Crime can be reduced if economic growth is encouraged by rolling back tax rates. Crime will rise if growth is inhibited by raising tax rates (even for the very rich).

2. Crime can be reduced by increasing the rate at which it is prosecuted successfully, and by ensuring that prisoners do not receive lenient sentences. Therefore, we need to (a) spend even more on the pursuit of criminal justice and (b) restore mandatory sentencing guidelines, which had been in effect (and effective) from 1989 to 2004. (Look at the relationship between SNT and the indices of crime, in the next-to-last graph, and you will have no doubt that mandatory sentencing guidelines were effective and are represented in the equation — to some extent — by the variable PRS.)

ENL and YNG, like SNT, are key determinants of the crime rate. Each of the three variables appears, with the right sign, in many of the 63 equations. So, I am certainly not ruling out ENL and YNG as important variables. To the contrary, they are important variables. But, just as with SNT, I can’t satisfactorily quantify their importance because of the limitations of regression analysis.