A REISSUE (WITHOUT UPDATES) OF THE ORIGINAL POST DATED DECEMBER 7, 2011

Interest rates reflect the supply of and demand for funds. Money is tighter now than it was in the years immediately before the onset of the Great Recession. Tim Congdon explains:

The reason for these (and other) low rates is that borrowers have become less keen about borrowing; that is, they lack confidence about future prospects for income (in the case of households) and returns on investment (in the case of businesses). Why should that be?

If the post-World War II trend is any indication — and I believe that it is — the American economy is sinking into stagnation. Here is the long view:

And here is the post-World War II view:

This trend cannot be reversed by infusions of “stimulus spending” or “quantitative easing.” It reflects an underlying problem that cannot be cured by those simplistic macroeconomic “fixes.”

The underlying problem is not “tight money,” it is that American businesses are rightly pessimistic about an economic future that is dominated by a mountain of debt (in the form of promised “entitlements”) and by an ever-growing regulatory burden. Thus business investment has been a decline fraction of private-sector GDP: 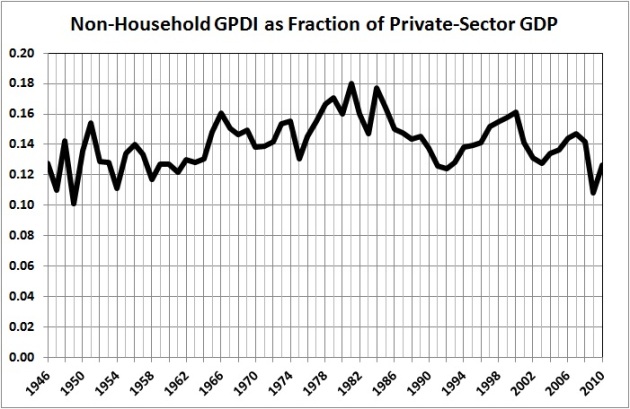 As long as business remains (rightly) pessimistic about the twin burdens of debt and regulation, the economy will sink deeper into stagnation. The only way to overcome that pessimism is to scale back “entitlements” and regulations, and to do so promptly and drastically.

In sum, the present focus on — and debate about — conventional macroeconomic “fixes” (fiscal vs. monetary policy) is entirely misguided. Today’s economists and policy-makers should consult Hayek, not Keynes or Friedman or their intellectual descendants. If economists and policy-makers would would read and heed Hayek — the Hayek of 1944 onward, in particular — they would understand that our present and future economic morass is entirely political in origin: Failed government policies have led to more failed government policies, which have shackled both the economy and the people.

Economic and political freedoms are indivisible. It will take the repeal of the regulatory-welfare state to restore prosperity and liberty to the land.