“Climate change” is religion refracted through the lens of paganism.

There is a hypothesis that the purported rise in global temperatures since 1850 (or some shorter span if you’re embarrassed by periods of notable decline after 1850) was or is due mainly or solely to human activity, as manifested in emissions of CO2. Adherents of this hypothesis call the supposed phenomenon by various names: anthropogenic global warming (AGW), just plain global warming, climate change, and climate catastrophe, for example.

Those adherents loudly advocate measures that (they assert) would reduce CO2 emissions by enough to avoid climatic catastrophe. They have been advocating such measures for about 25 years, yet climate catastrophe remains elusive. (See “pause,” below.) But the true believers in AGW remain steadfast in their faith.

Actually, belief in catastrophic AGW requires three leaps of faith. The first leap is to assume the truth of the alternative hypothesis — a strong and persistent connection between CO2 emissions and global temperatures — without having found (or even looked for) scientific evidence which disproves the null hypothesis, namely, that there isn’t a strong and persistent connection between CO2 emissions and global temperatures. The search for such evidence shouldn’t be confined to the near-past, but should extend centuries, millennia, and eons into the past. The problem for advocates of AGW is that a diligent search of that kind works against the alternative hypothesis and supports the null hypothesis. As a result, the advocates of AGW confine their analysis to the recent past and substitute kludgy computer models, full of fudge-factors, for a disinterested examination of the actual causes of climate change. There is strong evidence that such causes include solar activity and its influence on cloud formation through cosmic radiation. That truth is too inconvenient for the AGW mob, as are many other truths about climate.

The second leap of faith is to assume that rising temperatures, whatever the cause, are a bad thing. This, despite the known advantages of warmer climates: longer growing seasons and lower death rates, to name but two. This is so because believers in AGW and policies that would (according to them) mitigate it, like to depict worst-case scenarios about the extent of global warming and its negative effects.

The third leap of faith is related to the first two. It is the belief that policies meant to mitigate global warming — policies that mainly involve the curtailment of CO2 emissions — would be (a) effective and (b) worth the cost. There is more than ample doubt about both propositions, which seem to flow from the kind of anti-scientific mind that eagerly embraces the alternative hypothesis without first having disproved the null hypothesis. It is notable that “worth the cost” is a value judgment which springs readily from the tongues and keyboards of affluent Westerners like __________ who already have it made. (Insert “Al Gore”, “high-end Democrats,” “liberal pundits and politicians,” etc.)

Prominent among the leapers-of-faith in my neck of the woods is the “chief weathercaster” of an Austin TV station. We watch his weather forecasts because he spews out more information than his competitors, but I must resist the urge to throw a brick through my TV screen when his mask slips and he reveals himself as a true believer in AGW. What else should I expect from a weather nazi who proclaims it “nice” when daytime high temperatures are in the 60s and 70s, and who bemoans higher temperatures?

Like any nazi, he projects his preferences onto others — in this case his viewership. This undoubtedly includes a goodly number of persons (like me) who moved to Austin and stay in Austin for the sake of sunny days when the thermometer is in the 80-to-95-degree range. It is a bit much when temperatures are consistently in the high 90s and low 100s, as they are for much of Austin’s summer. But that’s the price of those sunny days in the 80s and low 90s, unless you can afford to live in San Diego or Hawaii instead of Austin.

Anyway, the weather nazi would make a great deal out of the following graph:

The graph covers the period from April 1977 through April 2015. The jagged line represents 12-month averages of monthly averages for the official National Weather Service stations in Austin: Mueller Airport (until July 1999) and Camp Mabry (July 1999 to the present). (There’s a history of Austin’s weather stations in a NOAA document, “Austin Climate Summary.”) The upward trend is unmistakeable. Equally unmistakeable is the difference between the early and late years of the period — a difference that’s highlighted by the y-error bars, which represent a span of plus-and-minus one standard deviation from the mean for the period.

Your first question should be “Why begin with April 1977?” Well, it’s a “good” starting point — if you want to sell AGW — because the 12-month average temperature as of April 1977 was the lowest in 64 years. After all, it was the seemingly steep increase in temperatures after 1970 that sparked the AGW business.

A recent post by Bob Tisdale, “New UAH Lower Troposphere Temperature Data Show No Global Warming for More Than 18 Years” (Watts Up With That?, April 29, 2015), summarizes the history of satellite readings, in the course of documenting the “pause” in global warming. The “pause,” if dated from 2001, has lasted 14 years; if dated from 1997, it has lasted 18 years. In either event, the “pause” has lasted about as long as the rise in late-20th century temperatures that led to the AGW hypothesis.

What about those observations since the 1850s? Riddled with holes, that’s what. And even if they were reliable and covered a good part of the globe (which they aren’t and don’t), they wouldn’t tell the story that AGW enthusiasts are trying to sell. Take Austin, for example, which has a (broken) temperature record dating back to 1856:

Following the sudden jump between 1977 and 1980, the “trend” remains almost flat through 1997, albeit at a slightly higher level: 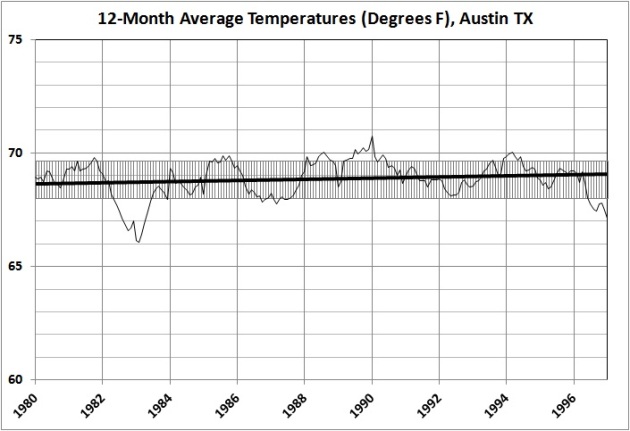 The sharpest upward trend really began after the very strong (and naturally warming) El Niño of 1997-1998:

Oh, wait! It turns out that Austin’s sort-of hot-spell from 1998 to the present coincides with the “pause” in global warming: 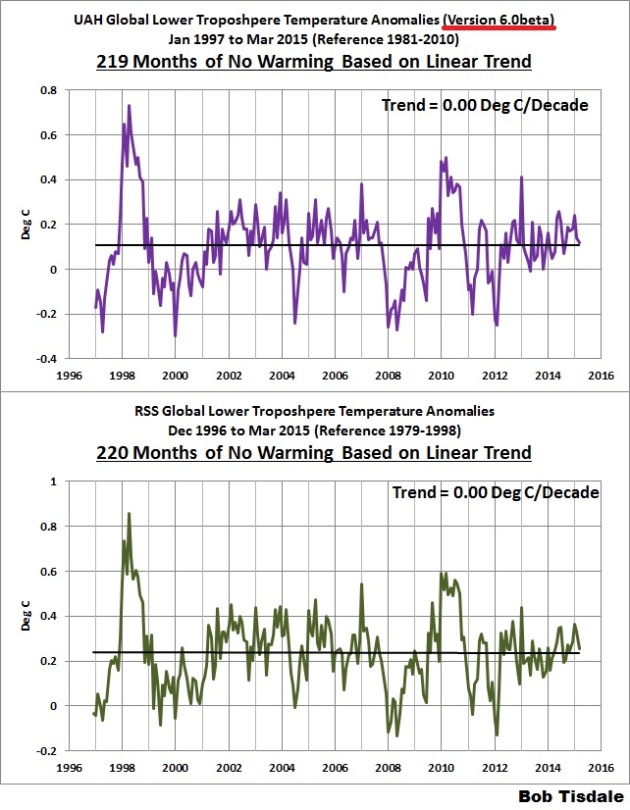 What a revolting development this would be for our local weather nazi, if he could be bothered to acknowledge it. And if he did, he’d have to look beyond the egregious AGW hypothesis for an explanation of the warmer temperatures that he abhors. Where should he look? Here: the rapid increase in Austin’s population, combined with a drought.

The rapid increase in Austin’s population since 2000 probably has caused an acceleration of the urban heat-island (UHI) effect. This is known to inflate city temperatures above those in the surrounding countryside by several degrees. 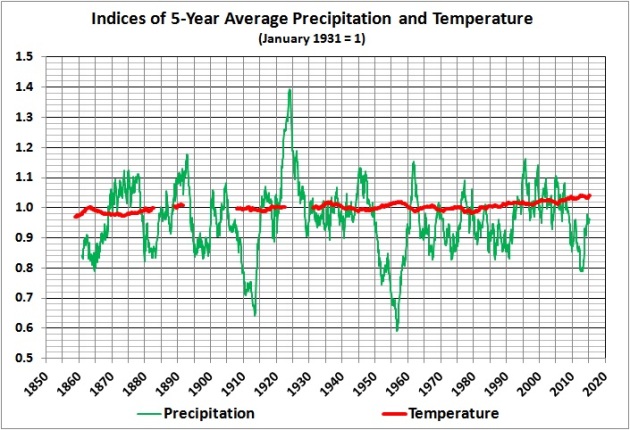 Why? Because Austin’s population is now six times greater than it was in the 1950s. The UHI effect has magnified the drought effect.

Conclusion: Austin’s recent hot weather has nothing to do with AGW. But don’t try to tell that to a weather nazi — or to the officials of the City of Austin, who lurch zombie-like onward in their pursuit of “solutions” to a non-problem.

BE SURE TO READ THE SEQUEL, IN WHICH I QUANTIFY THE EFFECTS OF PRECIPITATION AND POPULATION, LEAVING NOTHING ON THE TABLE FOR AGW.

2 thoughts on “AGW in Austin?”