In a twelve-year-old post, “The Main Causes of Prosperity,” I drew on statistics (sourced and described in the post) to find a statistically significant relationship between a nation’s real, per-capita GDP and three variables:

The effect of IQ, by itself, is strong enough to merit a place of honor: 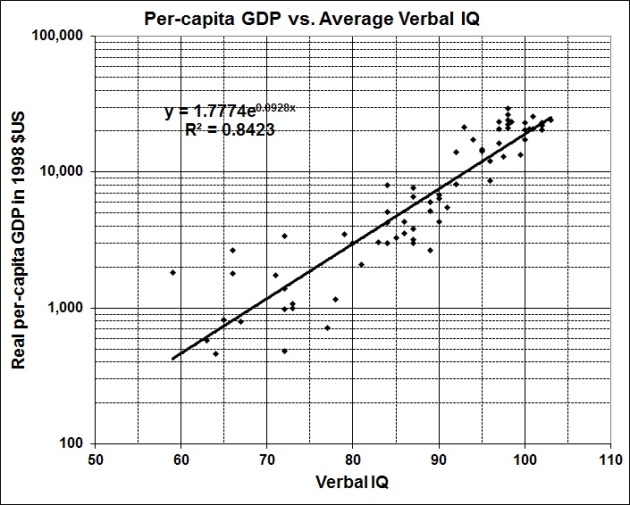 Another relationship struck me when I revisited the IQ numbers. There seems to be a strong correlation between IQ and distance from the equator. That correlation, however, may be an artifact of the strong (negative) correlation between blackness and IQ: The countries whose citizens are predominantly black are generally closer to the equator than the countries whose citizens are predominantly of other races.

Because of the strong (negative) correlation between blackness and IQ, and the geographic grouping of predominantly black countries, it’s not possible to find a statistically significant regression equation that accounts for national IQ as a function of the distance of nations from the equator and their dominant racial composition.

The most significant regression equation omits distance from the equator and admits race:

The r-squared of the equation is 0.78 and the p-values of the intercept and coefficients are all less than 1E-17. The F-value of the equation is 8.24E-51. The standard error of the estimate is 5.6, which means that the 95-percent confidence interval is plus or minus 11 — a smaller number than any of the coefficients.

The intercept applies to all “other” countries that aren’t predominantly black, white, or East Asian in their racial composition. There are 66 such countries in the sample, which comprises 159 countries. The 66 “other” countries span the Middle East; North Africa; South Asia; Southeast Asia; island-states in Indian, Pacific, and Atlantic Oceans; and most of the nations of Central and South America and the Caribbean. Despite the range of racial and ethnic mixtures in those 66 countries, their average IQs cluster fairly tightly around 84. By the same token, there’s a definite clustering of the black countries around 71 (84.0 – 13.2), of the white countries around 96 (84.0 + 12.4), and of the East Asian countries around 105 (84.0 + 20.7).

Thus this graph, where each “row” (from bottom to top) corresponds to black, “other,” white, and East Asian:

The dotted line represents a perfect correlation. The regression yields a less-than-perfect relationship between race and IQ, but a strong one. That strong relationship is also seen in the following graph: 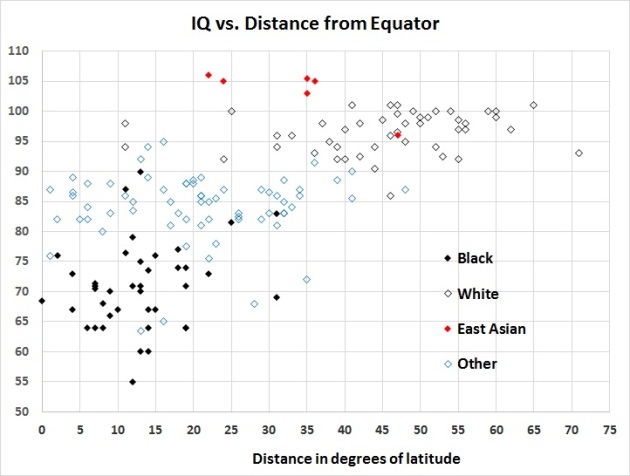 There’s a definite pattern — if a somewhat loose one — that goes from low-IQ black countries near the equator to higher IQ white countries farther from the equator. The position  of East Asian countries, which is toward the middle latitudes rather than the highest ones, points to something special in the relationship between East Asian genetic heritage and IQ.

My analysis strongly implies that IQ varies by race and is therefore strongly heritable. This is a point that I cover in several of the posts listed below. A long-standing, and fatuous, objection to that position is that race is a “social construct”. I address that point in “The Balderdash Chronicles“. Gregory Cochran has addressed it often, and most recently in a review of She Has Her Mother’s Laugh: The Powers, Perversions, and Potential of Heredity by Carl Zimmer.