Modeling is not science. Take Professor Ray Fair, for example. He teaches macroeconomic theory, econometrics, and macroeconometric models at Yale University. He has been plying his trade since 1968, first at Princeton, then at M.I.T., and (since 1974) at Yale. Those are big-name schools, so I assume that Prof. Fair is a big name in his field.

Well, since 1983 Professor Fair has been forecasting changes in real GDP four quarters ahead. He has made dozens of forecasts based on a model that he has tweaked many times over the years. The current model can be found here. His forecasting track record is here.

How has he done? Here’s how:

1. The mean absolute error of his forecasts is 70 percent; that is, on average his predictions vary by 70 percent from actual rates of growth.

2. The median absolute error of his forecasts is 33 percent.

4. His forecasts have grown generally worse — not better — with time. (See figure 2.)

5. In sum, the overall predictive value of the model is weak. (See figures 3 and 4.)

Figures 1-4 are derived from The Forecasting Record of the U.S. Model, Table 4: Predicted and Actual Values for Four-Quarter Real Growth, at Fair’s website. 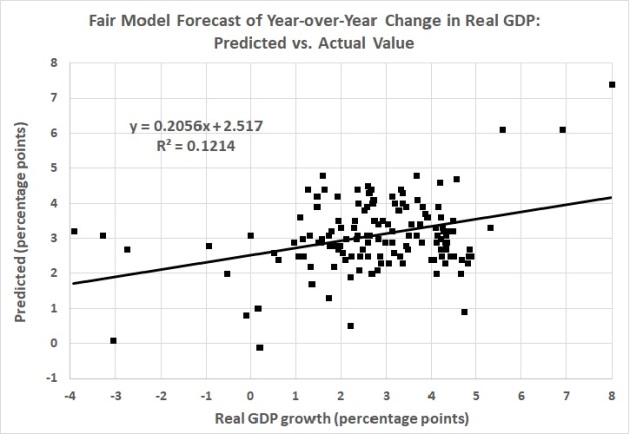 Given the foregoing, you might think that Fair’s record reflects the persistent use of a model that’s too simple to capture the dynamics of a multi-trillion-dollar economy. But you’d be wrong. The model changes quarterly. This page lists changes only since late 2009; there are links to archives of earlier versions, but those are password-protected.

As for simplicity, the model is anything but simple. For example, go to Appendix A: The U.S. Model: July 29, 2016, and you’ll find a six-sector model comprising 188 equations and hundreds of variables.

Could I do better? Well, I’ve done better, with the simple model that I devised to estimate the Rahn Curve. It’s described in “The Rahn Curve in Action“, which is part III of “Economic Growth Since World War II“.

The theory behind the Rahn Curve is simple — but not simplistic. A relatively small government with powers limited mainly to the protection of citizens and their property is worth more than its cost to taxpayers because it fosters productive economic activity (not to mention liberty). But additional government spending hinders productive activity in many ways, which are discussed in Daniel Mitchell’s paper, “The Impact of Government Spending on Economic Growth.” (I would add to Mitchell’s list the burden of regulatory activity, which grows even when government does not.)

What does the Rahn Curve look like? Mitchell estimates this relationship between government spending and economic growth: 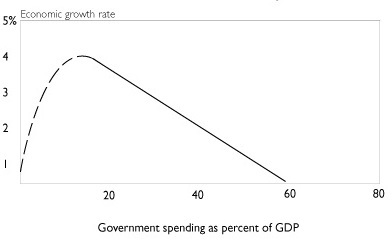 The curve is dashed rather than solid at low values of government spending because it has been decades since the governments of developed nations have spent as little as 20 percent of GDP. But as Mitchell and others note, the combined spending of governments in the U.S. was 10 percent (and less) until the eve of the Great Depression. And it was in the low-spending, laissez-faire era from the end of the Civil War to the early 1900s that the U.S. enjoyed its highest sustained rate of economic growth.

Elsewhere, I estimated the Rahn curve that spans most of the history of the United States. I came up with this relationship (terms modified for simplicity (with a slight cosmetic change in terminology):

To be precise, it’s the annualized rate of growth over the most recent 10-year span (Yg), as a function of F (fraction of GDP spent by governments at all levels) in the preceding 10 years. The relationship is lagged because it takes time for government spending (and related regulatory activities) to wreak their counterproductive effects on economic activity. Also, I include transfer payments (e.g., Social Security) in my measure of F because there’s no essential difference between transfer payments and many other kinds of government spending. They all take money from those who produce and give it to those who don’t (e.g., government employees engaged in paper-shuffling, unproductive social-engineering schemes, and counterproductive regulatory activities).

When F is greater than the amount needed for national defense and domestic justice — no more than 0.1 (10 percent of GDP) — it discourages productive, growth-producing, job-creating activity. And because government spending weighs most heavily on taxpayers with above-average incomes, higher rates of F also discourage saving, which finances growth-producing investments in new businesses, business expansion, and capital (i.e., new and more productive business assets, both physical and intellectual).

I’ve taken a closer look at the post-World War II numbers because of the marked decline in the rate of growth since the end of the war (Figure 2).

Here’s the revised result, which accounts for more variables:

A = the constant-dollar value of private nonresidential assets (business assets) as a fraction of GDP, averaged over the preceding 10 years

P = growth in the CPI-U during the preceding 10 years (annualized).

Here’s how the equation stacks up against actual 10-year rates of real GDP growth: 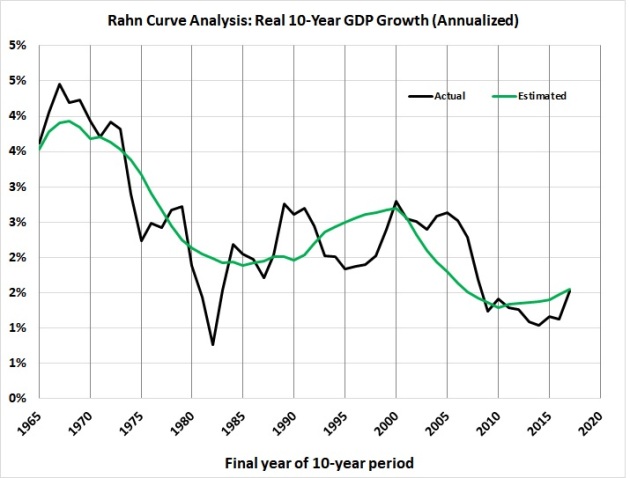 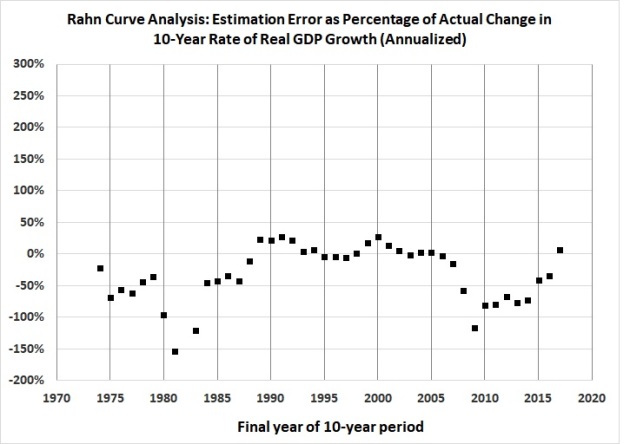 Not only that, but my model is less biased: 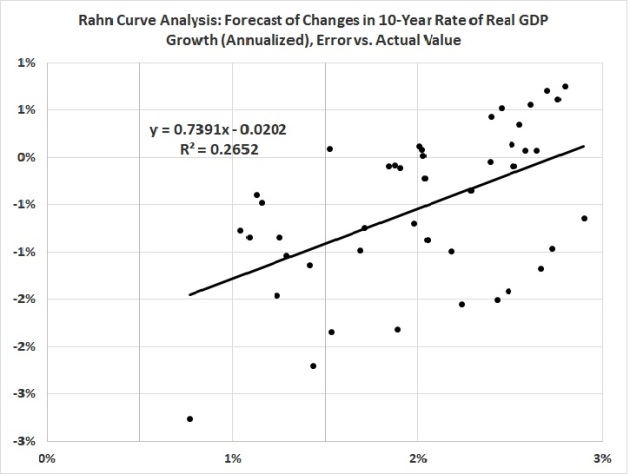 Finally, unlike Fair’s model (figure 4), my model captures the downward trend in the rate of real growth: 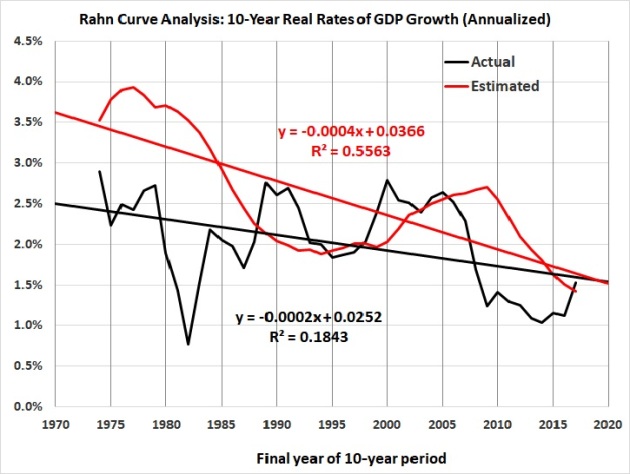 The moral of the story: It’s futile to build complex models of the economy. They can’t begin to capture the economy’s real complexity, and they’re likely to obscure the important variables — the ones that will determine the future course of economic growth.

A final note: Elsewhere (e.g., here) I’ve disparaged economic aggregates, of which GDP is the apotheosis. And yet I’ve built this post around estimates of GDP. Am I contradicting myself? Not really. There’s a rough consistency in measures of GDP across time, and I’m not pretending that GDP represents anything but an estimate of the monetary value of those products and services to which monetary values can be ascribed.

As a practical matter, then, if you want to know the likely future direction and value of GDP, stick with simple estimation techniques like the one I’ve demonstrated here. Don’t get bogged down in the inconclusive minutiae of a model like Professor Fair’s.