I won’t repeat all of “Climate Hysteria“, which is long but worth a look if you haven’t read it. A key part of it is a bit out of date, specifically, the part about the weather in Austin, Texas.

Last fall’s heat wave in Austin threw our local weather nazi into a tizzy. Of course it did; he proclaims it “nice” when daytime high temperatures are in the 60s and 70s, and complains about anything above 80. I wonder why he stays in Austin.

The weather nazi is also a warmist. He was in “climate change” heaven when, on several days in September and October, the official weather station in Austin reported new record highs for the relevant dates. To top it off, tropical storm Imelda suddenly formed in mid-September near the gulf coast of Texas and inundated Houston. According to the weather nazi, both events were due to “climate change”. Or were they just weather? My money’s on the latter.

Let’s take Imelda, which the weather nazi proclaimed to be an example of the kind of “extreme” weather event that will occur more often as “climate change” takes us in the direction of catastrophe. Those “extreme” weather events, when viewed globally (which is the only correct way to view them) aren’t occurring more often, as I document in “Hurricane Hysteria“.

Here, I want to focus on Austin’s temperature record.

There are some problems with the weather nazi’s reaction to the heat wave. First, the global circulation models (GCMs) that forecast ever-rising temperatures have been falsified. (See the discussion of GCMs here.) Second, the heat wave and the dry spell should be viewed in perspective. Here, for example are annualized temperature and rainfall averages for Austin, going back to the decade in which “global warming” began to register on the consciousnesses of climate hysterics: 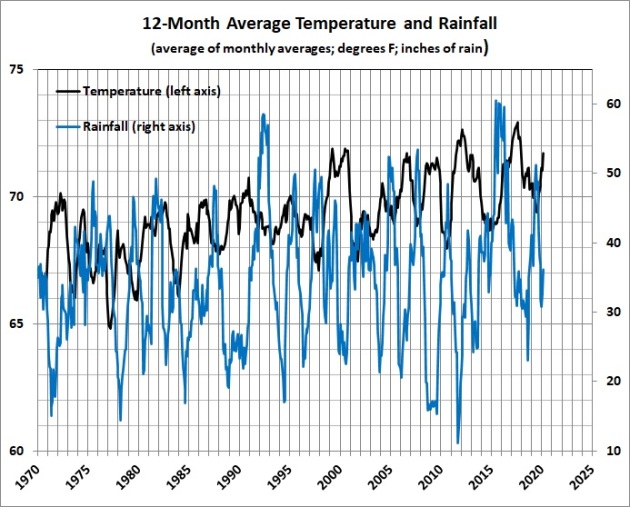 What do you see? I see a recent decline in Austin’s average temperature from the El Nino effect of 2015-2016. I also see a decline in rainfall that doesn’t come close to being as severe the a dozen or so declines that have occurred since 1970.

Here’s a plot of the relationship between monthly average temperature and monthly rainfall during the same period. The 1-month lag in temperature gives the best fit. The equation is statistically significant, despite the low correlation coefficient (r = 0.24) because of the large number of observations. 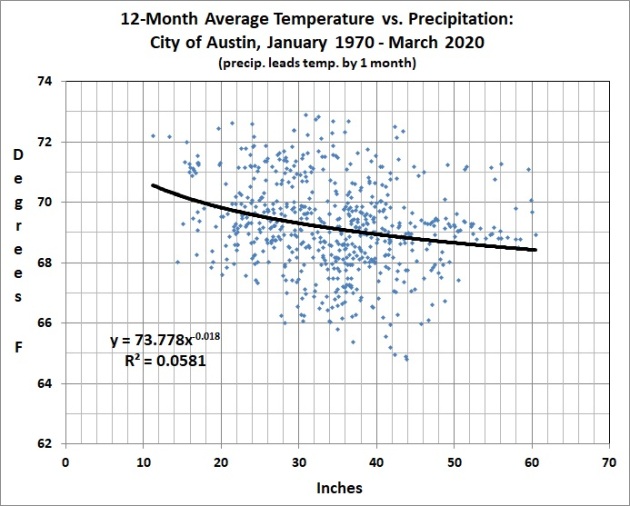 Abnormal heat is to be expected when there is little rain and a lot of sunshine. In other words, temperature data, standing by themselves, are of little use in explaining a region’s climate.

Drawing on daily weather reports for the past five-and-a-half years in Austin, I find that Austin’s daily high temperature is significantly affected by rainfall, wind speed, wind direction, and cloud cover. For example (everything else being the same):

The combined effects of variations in rainfall, wind speed, wind direction, and cloud cover are far more than enough to account for the molehill temperature anomalies that “climate change” hysterics magnify into mountains of doom.

Further, there is no systematic bias in the estimates, as shown by the following plot of regression residuals: 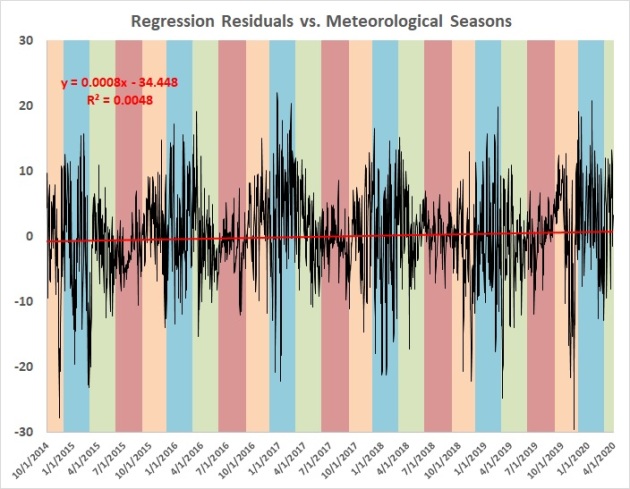 Summer is the most predictable of the seasons; winter, the least predicable; spring and fall are in between. However, the fall of 2019 (which included both the hot spell and cold snap discussed above) was dominated by overestimated (below-normal) temperatures, not above-normal ones, despite the weather-nazi’s hysteria to the contrary. In fact, the below-normal temperatures were the most below-normal of those recorded during the five-and-a-half year period.

Lurking behind all of this, and swamping all other causes of the (slightly upward) temperature trend is a pronounced urban-heat-island (UHI) effect (discussed here). What the weather nazi really sees (but doesn’t understand or won’t admit) is that Austin is getting warmer mainly because of rapid population growth (50 percent since 2000) and all that has ensued — more buildings, more roads, more vehicles on the move, and less green space.

The moral of the story: If you really want to do something about the weather, move to a climate that you find more congenial (hint, hint).